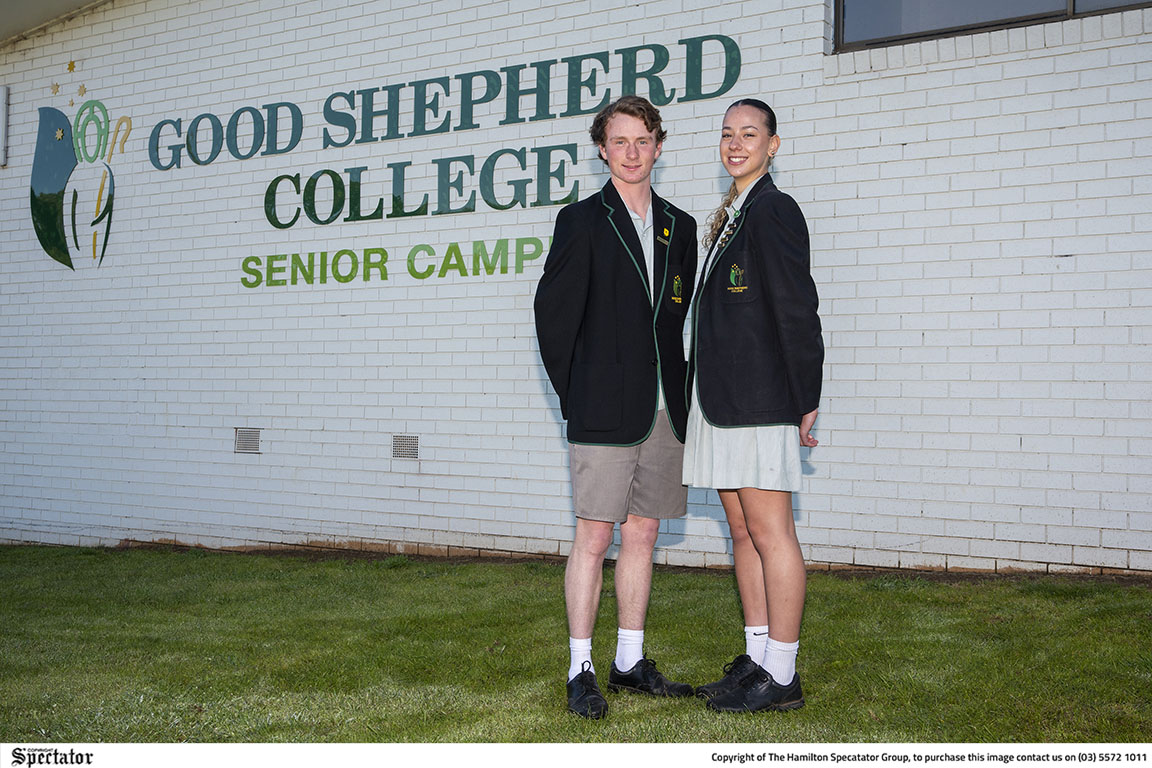 EDWIN Rentsch and Sophie Rentsch are the newly elected school captains at GSC, and both students are looking forward to bringing back events and being a voice for the students. Photo: LAUREN HAY.
By Blair Burns

EDWIN Rentsch and Sophie Rentsch will lead Good Shepherd College (GSC) in 2022 after they were voted in by their peers and teachers a couple of weeks ago.

The pair said they wanted to put a special focus on mental health and wellbeing throughout 2022 to raise more awareness on the issue.
GSC principal, Mr Shane Jurecky was pleased to see two young leaders who have done so much for the school and wider community rewarded.
“It’s exciting to have two young leaders who have a heart and passion for the school, they have certainly grown over the journey,” he said.
“It says something about how they have matured … and what their peers and the staff think about them.”
Mr Jurecky said both captains displayed many strong values which stood out during the selection process.
Adding that they had been great role models for the school and wider community through their faith and Christian Walk which was of strong importance.
“Edwin is a bit of a knockabout kind of guy but has a deep heart for the school and for his peers, he is willing to get his hands dirty and do those things that aren’t glamorous but behind the scenes need to be done.”
“He is certainly well liked, and he’s got the ability to communicate with the younger student right through to adult, that was one of his strengths that came through.
“Sophie has really (been) a strong model right through, from her singing (and) participation in sports, so certainly the girls in our school have looked up to her.
“She’s very effervescent and outgoing and she has the ability to really connect with the school community … both of them really typify those attributes that we’re looking for in our leaders.”
Edwin said it was an honour to receive recognition and be given the opportunity to serve in the role.
He said as his secondary schooling progressed, he found himself more suited to the school captaincy and decided to put his hand up for the position.
“I never intended on going for it right from the start but then it was more towards the selection of it that I thought I might go for it and see how I go,” he said.
“It is a privilege to serve the school and help lead it (and) it is always nice to know that you’ve got support behind you.”
The teenager felt he had developed his leadership over the journey and looked forward to seeing what the coming year would bring.
“I suppose I’ve come out of my shell and mainly developed those skills along the way (and) the school has definitely helped with that,” he said.
Sophie said school captaincy had been a goal of hers since year seven and was honoured to be a role model for her peers.
“I have kind of aimed for it, but I guess in the past few years I had to pick up my game a bit and I did - it paid off,” she said.
“It’s really exciting to be able to lead the school and show it in a good light (as well as) be a voice for the students.”
Sophie said there had never been a better time than right now to put an emphasis on mental health, following two years of limited social interactions.
“I do plan to raise more awareness and make people feel as if they can talk to someone,” she said.
“Even if it’s as simple as me having a chance to talk to students privately, just to give them someone to talk to, I’ll be happy.
“Over the past year or so I’ve had a lot of low times where I felt I couldn’t really talk to anyone about it, mainly from COVID taking away sports and hobbies that I love doing … and I know for a fact that a lot of other people have been feeling the same way.
“I think my main goal is to just make people feel more comfortable with talking to someone about their struggles, so they don’t have to keep it in and deal with their struggles by themselves.