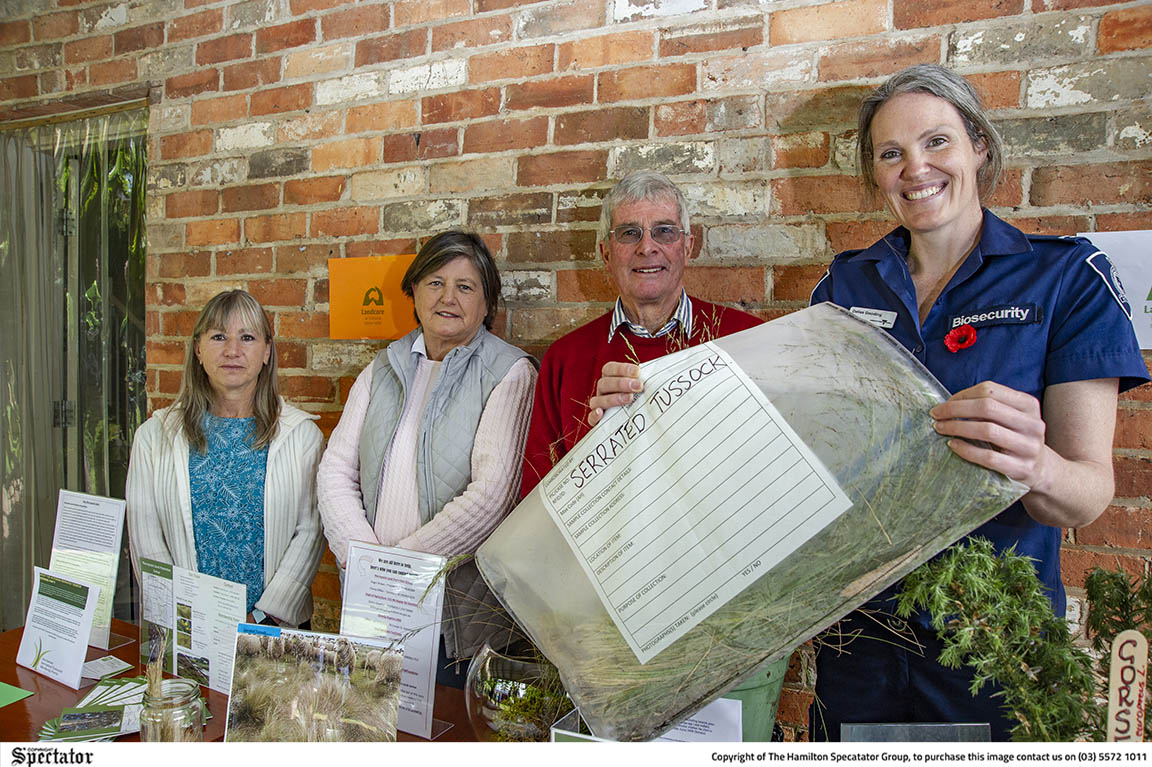 A DISPLAY table educating locals about weeds of concern within Western Victoria has been set up at Café Catalpa in Tarrington, by the Pierrepoint Land Protection Group.

The educational display, which was funded by a grant from the Victorian Serrated Tussock Working Party (VSTWP), is open to the public during the café’s operating hours until Wednesday, November 24.
Featuring fliers, graphs and samples of weeds found within the area, the aim of the display was to educate the public about how to identify dangerous weeds and who to contact for assistance.
Pierrepoint Land Protection Group president, Roger Brown said hopefully it helped locals become more comfortable with identifying weeds.
“The number one thing is to teach locals to check out if they’ve got any weeds that are specified in the display, and to realise that they can do something about them,” he said.
“A lot of people look at a paddock full of weeds and think it’s all too much but there are management things you can do to control them.
“It’s important that people realise they’re not on their own when dealing with weed management.”
One weed featured on the display was serrated tussock (Nassella trichotoma), a regionally prohibited weed introduced from South America, which rapidly decreases the biodiversity of native grasslands and significantly reduces the agricultural capacity of properties.
Serrated tussock spreads when its seeds enter new properties or land, commonly caused by wind, however. the seeds can also spread to new areas through attachment to clothing, machinery, fodder and livestock.
Mr Brown said serrated tussock is a “nasty weed” that the Pierrepoint Land Protection Group believe was originally introduced to the Hamilton area by fodder being moved up and down the Warrnambool-Hamilton railway line.
“The infestation has gradually moved here but fortunately with the help of various departments we’ve been able to get on top of it,” he said.
“It’s particularly bad in areas around Bacchus Marsh and the west of Melbourne, we don’t want to end up like that because there’s quite good grazing country around here.
“The department do annual inspections to find and locate areas or hotspots and then follow up with weed spraying, the idea is to eventually eradicate the weed in this area.”
Along with serrated tussock, other weeds were included in the educational display, such as Chilean Needle Grass and Spiney Rush, which are both highly invasive and rapidly dominating weeds that are out competing native species.
Pierrepoint Land Protection Group secretary and treasurer, Penny Riffkin said the group could assist locals with identifying and treating noxious weeds.
“It’s very difficult to know what’s native and what’s a weed but there are people in our group that can help, if someone’s not sure they can contact us and someone can come help with identification,” she said.
“The Landcare group is all about maintaining ecology and looking after the land.”
For more information you can visit the display or go to agriculture.vic.gov.au.