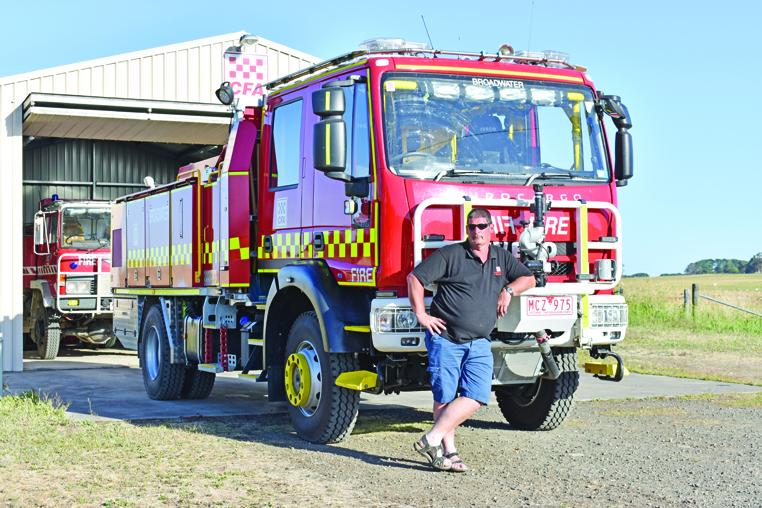 BROADWATER CFA captain, Hugh McFarlane has warned that the lack of mobile phone service in Broadwater will cost lives unless the infrastructure is modernised and the signal improves. The Regional Telecommunications Review invites people to have their say on issues like mobile phone service and internet reception. Photo: SUPPLIED.
By Jodi Fry

WE have all said it over and over, “the mobile phone service and internet reception here is terrible!”

The scariest situations locally have been bushfire and emergency situations when mobile service has been non-existent or unreliable. There have been life threatening situations.

The Regional Telecommunications Review is an opportunity for people living and working in regional, rural, and remote areas of Australia to share their views and experiences using telecommunications services in their area.

Every three years, the Regional Telecommunications Independent Review Committee is appointed to conduct the review. Committee reports are important in setting the regional communications policy agenda in the following years.

The review will examine the adequacy of telecommunications services in regional, rural, and remote Australia. It will also consider particular issues identified in the Terms of Reference, including the impact of government policies and programs, insights from COVID-19, emerging technologies, service reliability, regional development, and improving coordination between tiers of government.

The committee has been asked to deliver its report to the Australian Government by December 31, 2021, or earlier. The committee may make recommendations to the government, on which it must respond.

The review will be held from June to December.

There is a mobile blackspot at Broadwater, 50 kilometres south of Hamilton, where communication can be called unreliable at best. The impact of this lack of service is so much more than an inconvenience – it has proven to be life-threatening.

To understand the situation thoroughly, I caught up with Broadwater CFA captain and deputy group officer for the Macarthur Group, Hugh McFarlane.

Mr McFarlane is not one to mince his words and has made it clear that the lack of mobile phone service is going to cost lives unless the infrastructure is modernised and the signal improves. He has been involved in two fatal accidents and two major bushfire outbreaks locally in the last six years and the impact of mobile phone reception failure has been alarming.

“The two fatalities that we have had, have been in areas of no service – the police and ambulance have been in the same boat – they are affected too. It’s been incredibly difficult to communicate with the incoming ambulance when we have had to move quite some distance from the accident scene to get in contact, and then we lose contact with the patient at the centre of the emergency,” he said.

“Radios are of some help, but obviously we cannot be broadcasting emergency information to the general public.”
Regarding the two largest bushfires in the area in recent times – the Budj Bim (Mt Eccles) fire and the Gazette/Hawkesdale fires, Mr McFarlane explained that he wasted a lot of time trying to phone CFA members to get them on the trucks.

“I would try sometimes four or five times before I got through – multiply that by the number of members - simply to get crews to man the trucks,” he said.

“Then once at the eastern or Macarthur side of the fire front – we were even underneath the Mt Eccles tower and we still couldn’t get calls out. You are supposed to be able to co-ordinate trucks and dozers and water tankers with no phone service.

“The same thing happened with the Gazette fires – we couldn’t communicate between trucks. When you call in (if you can call in) civilian equipment like water tankers and bull dozers, they don’t have radios.

“There is a massive dead spot around Gazette too – we have complained but we have been told that it’s not a populated area, and our complaints are not going anywhere – but surely our lives matter too. We just seem to be banging our heads against a brick wall. An emergency situation requires an emergency response. It’s nowhere near good enough.”

We live in an area of reliable grazing country – of lush green grass that dries in the summer. We have wind and lightning strikes and plenty of bushland and reserves – we are in an area of serious fire risk. Add to that all the smaller fires that could have turned to massive ones if not for our volunteer fire services – our CFA.

Let’s rightfully complain and get it sorted – before you need an emergency response and can’t get one!

The Issues Paper, consultation dates, and details on how to submit can be found at www.rtirc.gov.au.
Written submissions should be lodged by Thursday, 30 September 2021.