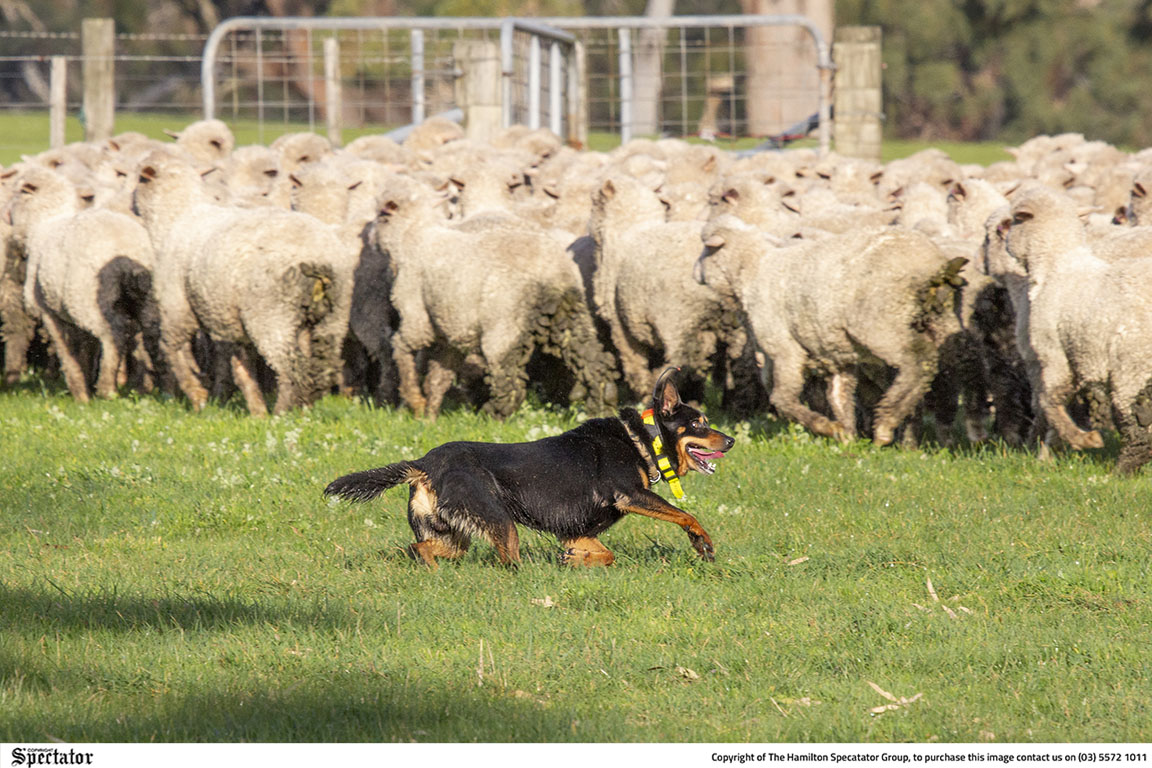 SIX-YEAR-OLD Wannon kelpie, Jack, is on his way to take out the title of Australia and New Zealand’s top working dog through the Cobber Challenge. His overall score, calculated from distance, speed and time, currently puts him in front of the field of 12 two weeks into the three-week challenge. Photo: MARK RABICH.
By Admin

VICTORIA Police is warning farmers to be vigilant for stock theft as the warmer weather approaches and lambs are weaned and drafted off into paddocks by themselves.

He said while sometimes the thefts weren’t noticed and reported until shearing or crutching time, spring and the early summer months were the time stock was most likely to go missing.

Det Sgt James said the winter period this year had been fairly quiet with stock theft reports, which he believed were due to COVID-19 lockdowns restricting the reasons for people to be out and about.

He said the wet weather had also made it harder to get into and around properties, particularly on the sides of the roads.

Over the last 10 years police have seen a trend of stock being stolen from properties that adjoin main roads with a dirt road running parallel along the back of the property.

Stock theft is also more common from lease blocks or paddocks that are not visible from residences.

Det Sgt James said there were some simple tips to follow to keep stock safe and detect trespassers to properties.
He said farmers should make sure gates off main roads were locked and secured from being lifted off the gate posts, consider investing in a “trail cam” which could be set up covertly to capture any unwanted visitors, and install CCTV signage, which worked as a “great deterrent”.

Farmers should also consider locking up paddocks for hay that adjoin main roads and run the stock in the central paddocks. Det Sgt James said that would make it easier to tell if there had been intruders, as anyone driving or walking through the hay paddock would leave obvious signs.

He also recommended lambs be tagged at marking with NLIS tags, and that farmers should consider investing in farm management software to help record stock numbers and movement.

Trespassers or suspicious activity around farms should be reported to Crime Stoppers immediately on 1800 333 000 or crimestoppersvic.com.au.

Det Sgt James said it was helpful to record number plates of any suspicious vehicles seen in the area and report them to police, and that any possible stock thefts are reported immediately.

“There is no problem if they are found later but we would rather know early,” he said.

Det Sgt James said farmers wanting to improve their farm security were welcome to contact him.

“Unfortunately, we aren’t able to get out to trade shows and field days due to restrictions and cancellations but we are only a phone call or email away,” he said.

Farmers could also contact Det Sgt James by email on hamilton.ciu@police.vic.gov.au for a free farm security checklist and other resources.