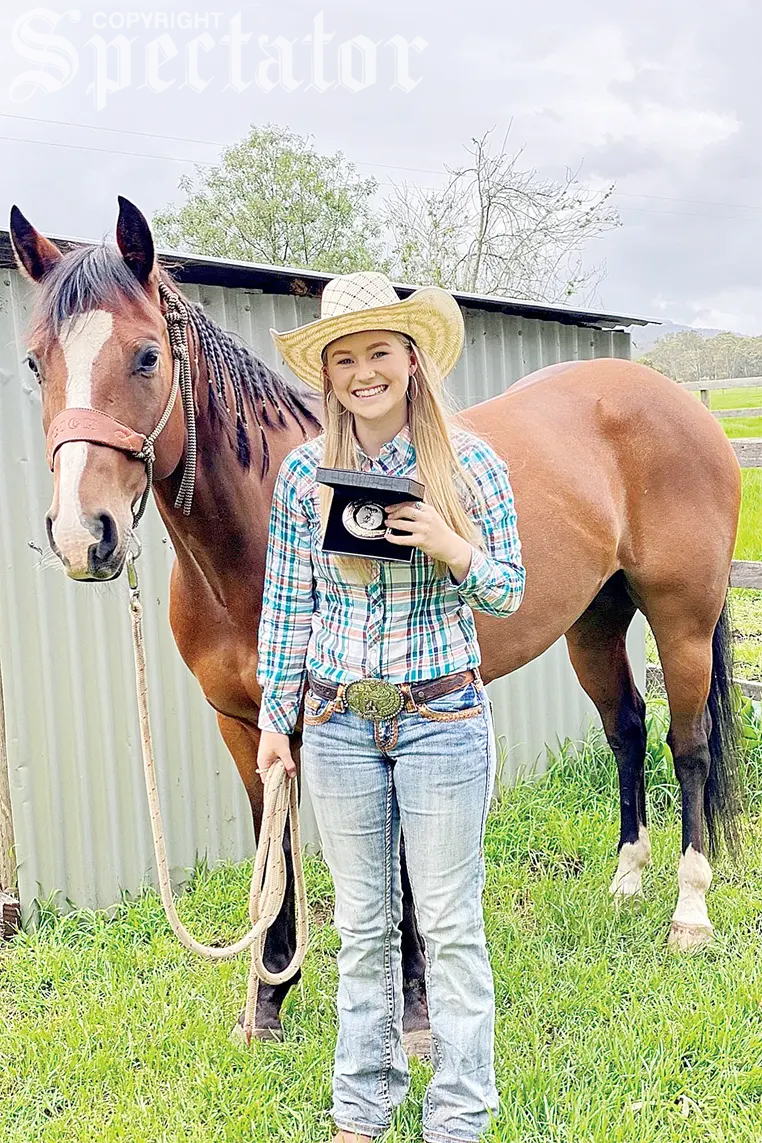 THE inaugural Nat Bell Memorial Buckle stayed in the south-west after Heywood’s Morgan McLean topped the times in the Junior Barrel Race, the event Nat competed in each year, at the Branxholme Rodeo on Saturday.

It wasn’t the only win of the night for the 17-year-old, who doubled up to win the Ladies Barrel Race, but winning the first buckle in honour of her friend tops the highlights of her career to date.

“It was very special, very sentimental, I was just very excited to be the first one to win the memorial buckle,” McLean said.

“(It means something) to know it has gone to someone who was in the area from where she lived.”

Their friendship began at school, as the pair discovered their mutual love of rodeos, and it fast became a common interest that was talked about daily.

McLean said it was not a common discussion topic among the wider school community, strengthening the bond she had with Bell.

“She had been around the circuit and I got to know her, and we helped each other out a lot.

“We talked a fair bit at school and rodeos and before she passed away, we were talking about going for a ride together.”

With emotions high at the event, McLean tried to remain focused.

The ladies’ race, ran first, gave her the chance to get rid of any cobwebs, proving to be a positive day for the local, collecting both wins.

With so much at stake, the former Monivae College student knew she was in good form and had plenty of encouragement.

“I was pretty confident going into the event, I was really trying my best to win for Nat and the buckle added a lot more motivation for me,” McLean said.

“I just wanted to make her and her family proud; her family were cheering me on which game me a bit of a pump up.

“So far I have won five buckles in the past two years, but the Nat Bell Memorial Buckle is definitely the most special for me.”

The 17-year-old continues to maintain contact with the Bell family, talking to them at the Dartmoor rodeo the weekend prior as well as during the Branxholme event.

Last weekend was not the first time the barrel racer claimed the ladies and junior double, showing her improvement and potential is unlimited.

“Last year I was really fortunate to win the junior and ladies at Dartmoor, so I had done it before and it is just a special moment,” McLean said.

“I am just very thankful to have a great horse.”

“I ride him all the time, it is a great bond we have, and we really click.”

McLean, who turns 18 in August, said she started her rodeo journey when she was a lot younger, taking her love of horses to the next level.

“I started on a little grey pony and then I went to a buckskin horse then I moved up and got Flick.”

With the Rodeo Services Australia (RSA) circuit heading to the Gippsland town of Bunyip tonight, McLean will be hoping for another strong performance.

“At Colac, the Woodalls have a buckle they hand out to the person who has the most points, so I am hoping to win that,” she said.

“Last year I went to the Mount Isa rodeo and I went to the Tamworth ABHA (Australian Barrel Horse Association) finals as well,” McLean said.

“I am very lucky to have my parents help me out a lot; I work people’s horses and ponies as well and put all my prizemoney back into entry costs for other events.”

Working alongside mentor, Castlemaine’s Julie Breed, McLean continues to put in the hard yards and fine tune her technique.

Breed, who won the 2019 RSA Ladies Buckle, coaches Mclean at each event with the final goal of moving overseas to compete.

Eventually I do want to head over to America and barrel race over there,” McLean said. “I would love to do it over there professionally for a living.”

Crowds a chance at Penshurst
16 hours ago