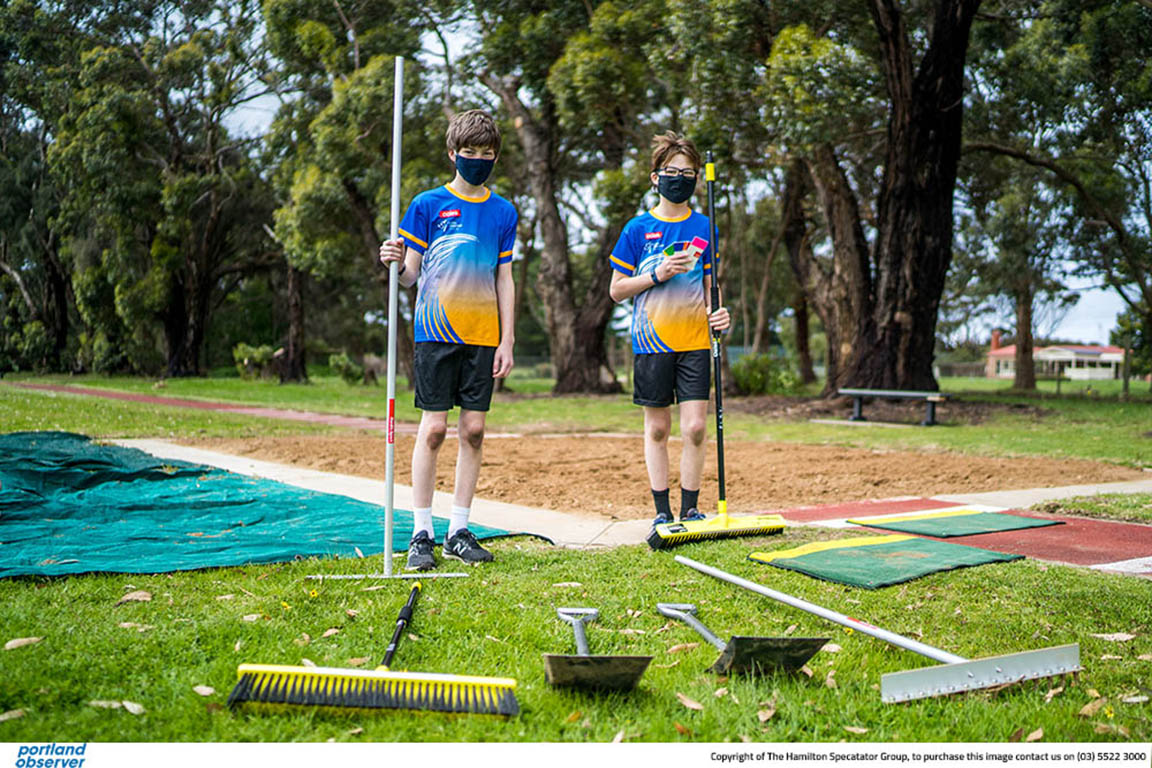 PORTLAND Little Athletics Centre members, brothers Xavier and Noah Board, both 13, with some of the new long jump equipment purchased thanks to a $2600 grant from Coles. Picture: MICHAEL PETERS 201010mp01
By Spec.com.au

Despite the state government’s approval some weeks ago for non-contact outdoor junior sport to return, it was only last week that the final go-ahead was given to regional Victorian centres with Return to Play protocols having to be formulated and approved.

For Portland, that means a return to action about two weeks later than its season would normally begin.

Registrations are now open and need to be made online through Little Athletics Victoria’s website.

“The trial membership allows kids new to Little Aths to come and try for two nights free of charge.

“These athletes still need to register online prior to attending though.”

Due to COVID-19 restrictions, the weekly Thursday evening competition at Nelson Park will look a little different this season.

“We are operating with a maximum of 10 athletes per group, and there can be no interaction between the groups on the night so we have done a fair bit of preparation to structure the competition around those protocols,” Belden said.

“We also have some stringent processes in place whereby athletes will have to sanitise their hands between each event and our equipment, such as the shot put, discus and javelin, will have to be cleaned between each athlete’s turn.

“We also decided not to run the hurdles event because it’s just too big a job to clean every hurdle after each use.”

Come next Thursday Portland will be using its new long jump pit for the first time.

“The timing for this is perfect, because having a second long jump pit now means we have four areas where we can do long jump and triple jump, whereas in the past we have only had two.

“That will allow us to keep our groups spread out and it also alleviates waiting times at long jump, which has been a problem for us in the past.

“The new pit is being done in stages.

“At the moment we have built the pit itself, thanks partly to some funding from the Glenelg Shire Council’s Community Grant program, and this summer we will be adding the run-ups thanks to a grant from Pacific Hydro.

“We will use the new pit with our younger athletes because its not essential for them to have a synthetic run-up.”

Portland recently received a third grant for the project through the Coles Little Athletics Community Fund.

Portland’s allocation of $2600 was one of 158 grants awarded across Australia to Little Athletics centres, totalling $521,000.

The grant has allowed Portland to purchase two new covers – one for the new pit and one for the old pit – so that the sand can be kept clean, as well as items such as take-off mats, run-up markers, rakes, shovels, brooms and measuring tapes.

“We know it’s been a difficult six months for everyone involved in community sport, particularly little athletes. We hope news of this $2600 grant to Portland Little Athletics Centre will give their athletes, families and volunteers a morale boost ahead of the new season,” he said. Funds for the grant are raised through the sale of specially marked chiller bags designed by Aussie kids, with 10 per cent of every bag sold directed to the Coles Little Athletics Community Fund