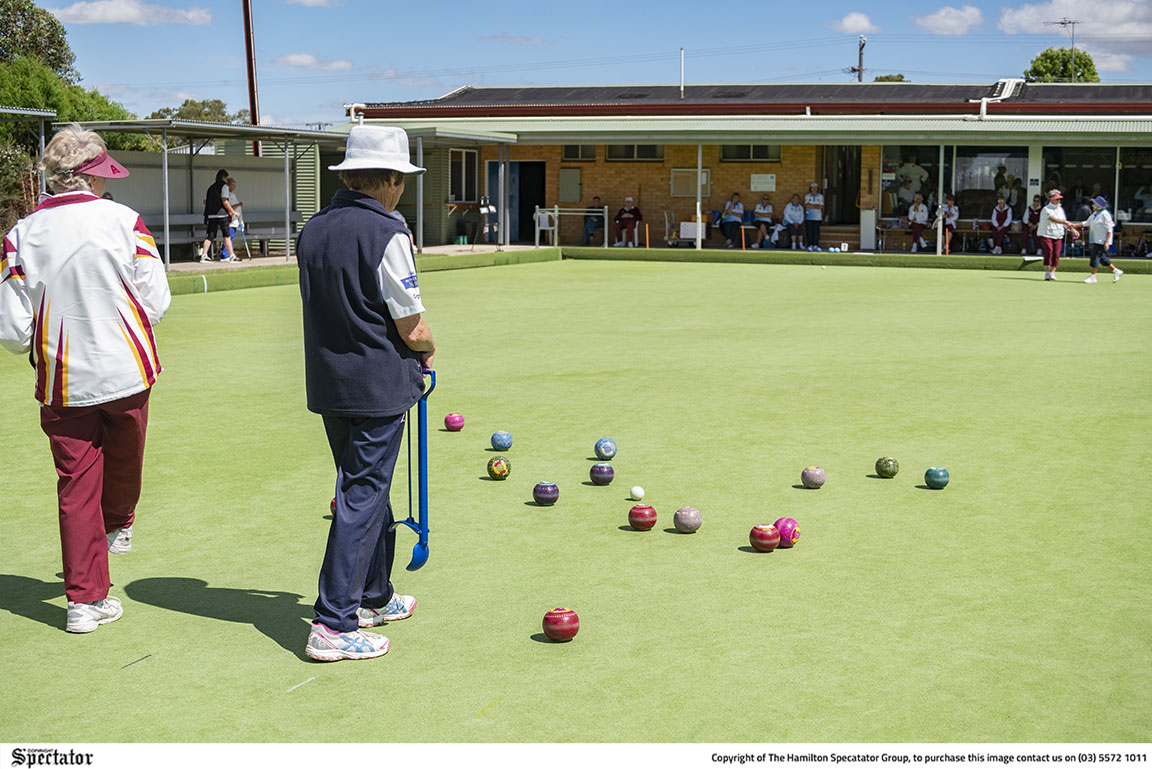 IT has been a busy week for bowls players, as the Weekend Pennant season finally got underway.
By Admin

DIVISION one is where 12 players compete against each other, and the season started off with a solid win to RSL Memorial playing Casterton down south.

Jan Woolley and team commenced the season with a 17-15 win against Mary Anne Allen, a close one to get underway.
June Leahy gathered another two points after defeating Berniece Sullivan, 28 to 10.
On the other side of the ledger, Leonie Buchanan lost to Nancy Sharam 25-29.
Overall it was 70-59, earning Memorial 14 points to Casterton’s two.
At the time of writing this report results of the Portland Grangeburn game were not available.
There are five sides in Division one and Hamilton had the bye.
Division Two
COLERAINE was at home to Portland, and in division two, eight players face-off.
Chris Rigby won this one, 20-15, playing Joan Cottier.
But Bev Fry came up against Val Baker and crew to be defeated 9-27.
Therefore, Coleraine lost to Portland, 29-42 and managed two points to Portland’s 12.
Balmoral was nestled in at home and had a two-rink win playing Memorial.
Chick Trotman with Nett Tinning, Jenni Mutch and Pauline Koenders scooped the division high score pool with 36.
Meredith Fredericks’ team on the other side scored a nine.
The overall totals were 61-28.
The third game was between Penshurst and Macarthur and in this encounter there was a rink win each and the overall win went to Penshurst.
Jenni Kinneally and team rolled up 14, but Jean Schroeder steered her team to 30.
Ann Rentsch got to 19 and Bev Bourke 15, leading to a 61-28 victory to Penshurst.
Why note the totals you may ask? Well, when the finals come about, and two sides are on equal points, then shots differences are used in calculations.
In this division there are seven sides so Hamilton drew the bye here as well.
Division Three
DARTMOOR and Macarthur played the first game and Dartmoor had a win.
Elaine Jones almost equalled the score above and the offsiders were Julie McInnes and Tricia Brown, combining for 35 to hold off Diane Cowland, Frank Pye and Ken Blohm, who could only manage 14.
Kaye Lanyon was pipped at the post by Carole Dunn by two shots, 18-20.
Overall it was a 53-34 win and collected twelve points to two.
As you can see here only six players to a side.
Grangeburn Red lost to Portland, 32 to 41 in the final game of the round.
Lesley Stewart managed 14 to Margaret Millich’s 24 and Netti Ryan finished with 22 to Carmel McKenzie’s 17.
Again, it was two points to 12 for the ladder.
Results of the Casterton-Grangeburn Blue game were not available at time of print.
Other news
LAST Saturday and Sunday the area’s mixed pairs were played.
On Saturday sectional play was conducted and in this format four pairs form a section and play each other.
The winner of each section then plays off in the knockout rounds for the title.
At Heywood, Memorial’s Ted and June Leahy were the winners of one section and Lionel Shelton with Heather Burgess from Portland won the other.
At the same time two sections played at RSL Memorial and Tom Englezos with Kim Overall won one section on their home green and Chris Flemming with his partner won the other.
On Sunday at Portland the grand final was played by the Englezos pair against the Shelton duo, as the former named came out as the overall winners and now represent our area in the region finals later in the season.
Congratulations to the winners and thanks to Heywood, Memorial and Portland for conducting a very successful championship.
This weekend the men’s section area triples will be played with the sectional games to be at Grangeburn and Macarthur with the knockout at RSL Memorial.
The women’ state singles will be played at Hamilton on Monday and prior to the Thursday entry closing day seven entries have been received.