Late call up for Mayne 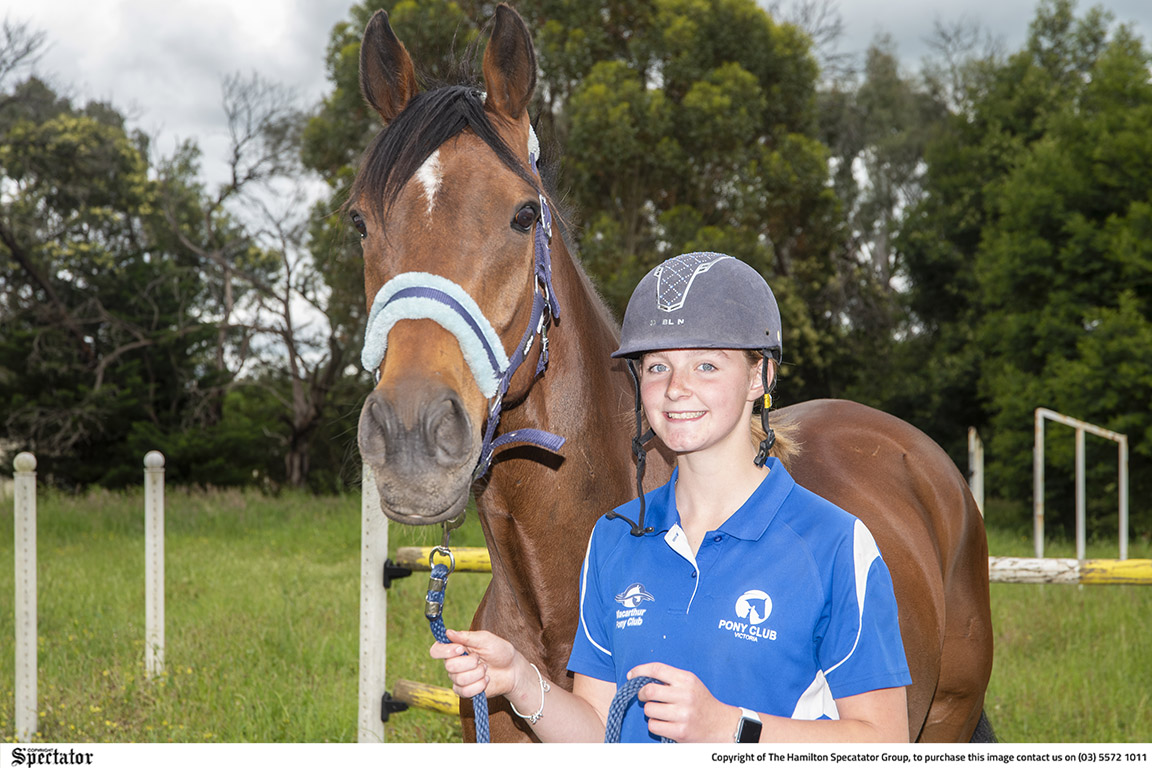 Maddie Mayne will compete as part of the Victorian junior showjumping team this weekend. Photo: BLAIR BURNS.
By Adam Hill

AFTER sitting on the reserves list for months, Hamilton’s Maddie Mayne, received the news she had been hoping.

The 15-year-old will take her horse, Alpha Tango Sierra, who is an off track thoroughbred and will compete at the championships following a gruelling selection process.

“We went to training days with coaches and the selectors and we had lessons with them to see how well we were going,” Mayne said.

“We went to Lilydale and Ballarat for those.”

Mayne was listed as a reserve rider following the initial team selection, but two weeks ago received an email asking if she was available to ride as part of the six-person team.

Last Thursday the ride was confirmed, giving Mayne a narrow window to train and prepare for the two-day event.

“I am pretty excited, not really that nervous,” Maybe said.

“When it comes to the day, I will be pretty nervous.

“I am not expecting too much from him, because he is an old horse; he is 15.

“I am just going to go there for the experience, have some fun and try my best.”

The Baimbridge College student has been riding for eight years and has done showjumping since her second year.

Mayne said the buzz of riding has kept her involved in the sport and hopes to make a career out of riding.

“It just gets my adrenaline going and is just good fun and all the people you meet doing showjumping,” she said.

“After school, I am hoping to go overseas to a showjumping stable.

“I have done some sessions with Russell Johnstone, he has been to the Olympics twice and I got lessons off him in the winter.

Mayne went to the state showjumping titles in April and was reserve champion, but this weekend’s opportunity is a step up and one the local is hoping to embrace.

Addinsall wins Rider of the Year
MAYNE isn’t the only local competing at the event, with Zoe Addinsall also set to saddle up in Warragul.

Addinsall is fresh of collecting the Pony Club Australia Rider of the Year award for 13-17 age group.

The Dunkeld Pony Club member said she was surprised to find out she had won.

“I was very shocked and very happy, I was in the school library when I found out,” Addinsall said.

She said it was great to see her training pay off and credited the support of her coaches for the success she has had recently.

“Probably my riding lessons with Jamie and Maureen,” she said.

“The main thing has been training with Tully Watt.

“I have training sessions every Saturday with Tully and that has helped.

“I have nationals (this weekend), then the state championships in December.

“I think I will do really well.”

Addinsall said she wanted to thank “Dunkeld Pony Club, my mum and my dad and my zone teammates” for their support.

With strong representation in Gippsland this weekend, it is promising for both Mayne and Addinsall that they have been selected and the easing of restrictions allowed the event to
go ahead.