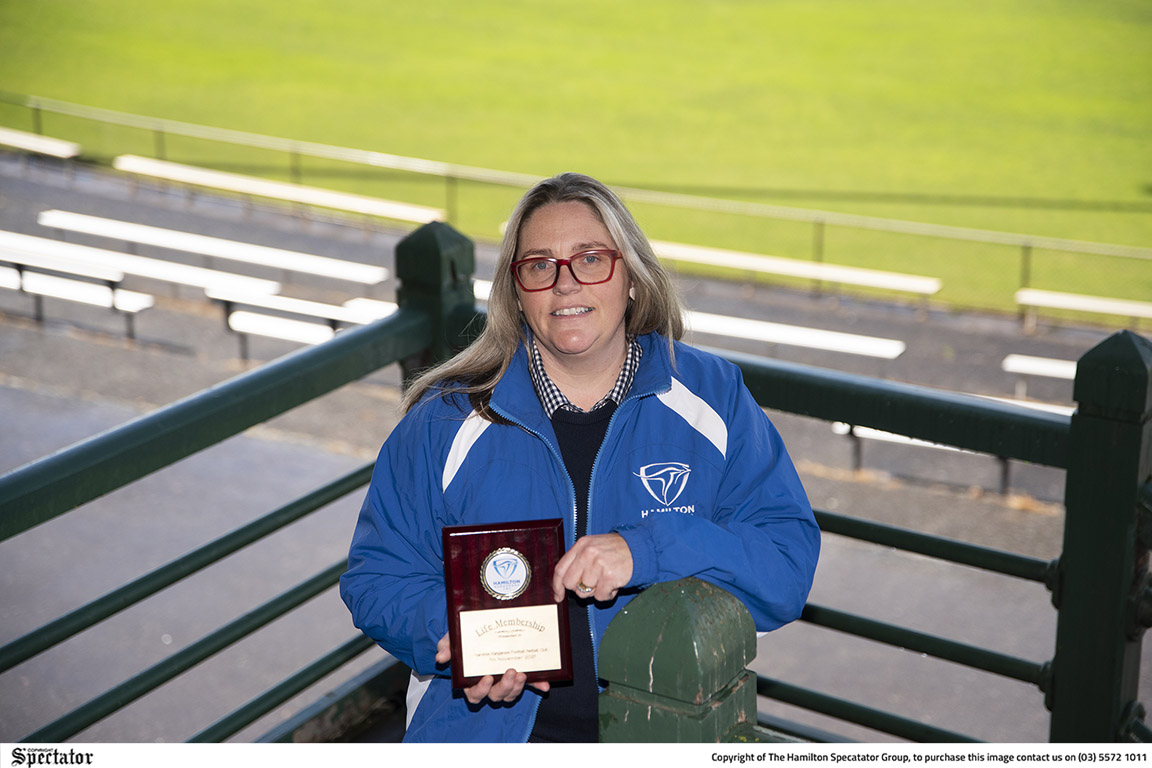 HAMILTON Kangaroos Football Netball Club has a new life member after Renae Porter was acknowledged for her contribution to the club earlier this month.

The club had its family day on November 7 with the event doubling as a presentation day with Porter receiving the award at Melville Oval.
Porter said it was a shock but was humbled to be recognized for her contribution over the years.
“It was actually a really big surprise, when you are involved with the club, you don’t look for the accolades, you just do what is required,” she said.
“I found out they have been trying to give it to me since 2019, but obviously COVID has impacted that.
“I am happy to be behind the scenes, I don’t like to be the person who gets the limelight.
“But it is lovely to be recognized, it is very humbling and when I have had to look back and consider what I’d done, I think you do it because the club needs it.
“You get so much back from getting at the club.”
Porter played her junior netball at Hamilton, before moving to Hamilton Imperials to play her senior netball, eventually coaching A Reserve along with junior teams at different times also.
She has also held office-bearer roles including secretary, along with umpire coordinator and helping in the canteen.
Porter said to have been involved with all three Hamilton-based clubs made the acknowledgement even more special.
“I actually started at Hamilton with 15-and-Unders, then I went to Hamilton Imperials, then obviously they merged and came together and having played seniors at Imperials, now it feels like it has come together,” she said.
Always one to put her hand up to do whatever is necessary, Porter said being in a club environment was something she valued and was glad to have given back to ensure future generations get the benefit.
“Now that I am a parent, I will do things like the canteen,” she said.
“The reason I stay involved, people have to give back to a club to build culture and the volunteers have to pay it forward for the ones who did it for us.
“It also probably comes back to the saying “it takes a village to raise a child”.
“And it helps us as a community, the easiest way to make friends is to join a football club.”
Porter has been involved in more than 200 games as a player and coach and there have been times throughout when she has taken on other roles, providing additional challenges along the way.
“I was in my early 20s when I was A reserve coach, that was a big challenge because I was still developing as a player,” she said.
“I was umpires coordinator, that was probably my most challenging role, because you are drawing in umpires from outside the club as well.”
Porter’s fundraising efforts have not gone unnoticed as well, ensuring the club remained sustainable.
The Hamilton Kangaroos’ newest life member urged anyone who was considering getting involved to do so.
“You won’t regret it, a football club has a space for everyone, regardless of age or gender and to put yourself out there,” she said.
“If you come in and just want to be there for the social events or help out on the day, we welcome everyone.”
Club chairman, Lachy Patterson said it was great to be able to acknowledge Porter’s contribution, but also to acknowledge the players and performances from the 2021 season at the family day.
“I think the community needed a day to get together and enjoy each other’s company,” he said.
“It is important to acknowledge people and performances, particularly after the past two years and what everyone has been through.”