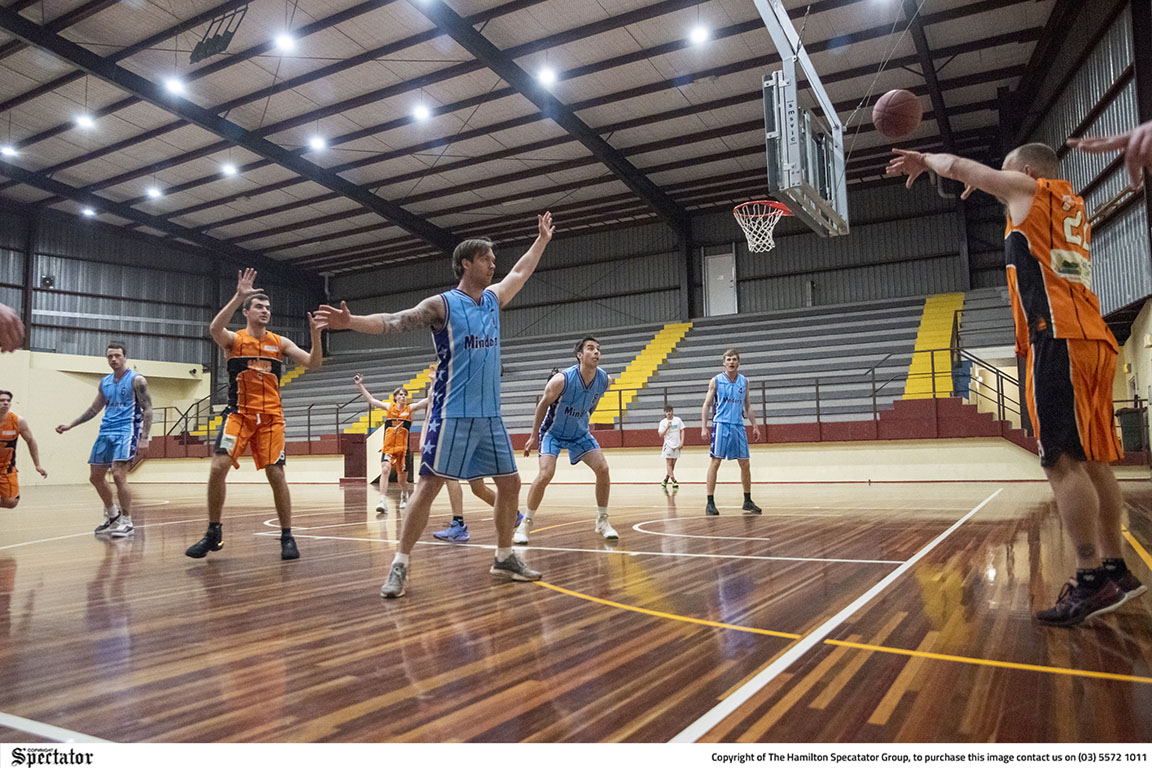 THIS week's HBA schedule has been significantly impacted by the recent COVID-19 outbreak in Hamilton, along with the change to vaccination requirements at HILAC, which came into effect on Wednesday. Photo: LAUREN HAY.
By Blair Burns

AS the Hamilton COVID outbreak continues to grow, Southern Grampians Shire made the decision that patrons over the age of 12 years and two months attending the Hamilton Indoor Leisure and Aquatic Centre (HILAC) for community sport will now be required to show proof of double vaccination upon entry – this came into effect yesterday.

This is in addition to the restrictions already in place at the venue for gym, aquatic centre and courts.

All basketball has been cancelled for the remainder of the week while junior games of cricket scheduled for Tuesday and Wednesday were also called off.

“In light of recent community cases increasing within the Southern Grampians and following community feedback from HILAC users, council has made the decision to require all patrons attending our HILAC facility for the specific purpose of community sport, to now be double vaccinated to enter,” he said.

“This decision has not been taken lightly but has been put in place to protect not only our patrons and staff, but the wider Southern Grampians community.

“Currently the double vaccination requirement is already in place for the Library, Cinema, Gallery and PAC so this change will align HILAC with these services.

“(It) will help to eliminate any confusion and community uncertainty regarding entry requirements at HILAC.”

Restrictions are in place for all those over the age of 12 and two months while valid exemptions will be accepted – the two-month period is an opportunity for 12-year-old kids to receive both their vaccine doses.

“HILAC contacted us to say the CEO has changed it to double vaccinated all the time, there is government regulations, Basketball Vic guidelines, but this was local regulations,” he said.

“Community sport is able to operate for those not vaccinated, but HILAC’s ruling is that all players must be double vaccinated, because there is no other venue for us to play, we have to follow the ruling of HILAC.

“We will have teams that aren’t vaccinated so we will have players that can’t play.”

Following this, Hawker said the decision to call all the games for the rest of the week off was made by the match committee on Wednesday morning.

“One, we are going to experience forfeits due to the vaccination status and the second factor is everyone is concerned in our local area at the moment,” he said.

“The third incident that has come about as of late, there was somebody who had COVID that had been to HILAC on (last) Thursday for the Under-18 competition and there are texts coming out from the Department of Health.

“Our biggest concern was referees, we had no referees to umpire (due to exposure and waiting for tests), that was another big problem.”

Hawker said all of the referees who had been tested at the time of print had received negative results.

This was following six out of eight games in the women’s competition not going ahead due to forfeits on Tuesday night due to concern and unavailability of players through testing and isolation.

“We only had two out of eight games, that is a fair indication from the members that they didn’t want to be there, we want as much basketball as we can but don’t want to put our members in danger,” Hawker said.

There were ongoing discussions with the senior committee around what would happen with round three, after only some divisions and competitions were able to play.

Hawker said there was a number of different options as to what would happen with the fixture, one of those being the entire round gets scrapped and results of those who played are disregarded.

Another option was to continue the season with an uneven number of games across the different divisions.

It was expected that competitive games would be back next week, however there would still be a number of teams unable to play for a variety of reasons as cases increase.

“We won’t cancel next week until we have to, if there are more cases that pop up and its inappropriate to play, we will have to make that call,” Hawker said.

Hamilton and District Cricket Association (HDCA) president, Lloyd Ilett said the call was made earlier in the week to cancel junior cricket scheduled for Tuesday and Wednesday nights and a further decision on weekend cricket would be made tomorrow afternoon.

“We’ve cancelled Tuesday and Wednesday games only, keeping in mind the current situation in the community and where children are concerned, we’d rather err on the side of caution,” he said.

“It all comes from how we are going with WDHS (Western District Health Service) and the advisory, at this stage all matches for Friday, Saturday and Sunday are still on, we are planning as if they will play - a decision will be made at around 2-3pm on Friday.

“The match committee is taking the view of yes we want cricket to be played, but we want players and supporters to be safe.”

Ilett hoped that as a result of the communities’ high vaccination rate, the remainder of the season wouldn’t be affected from the outbreak.

“The players for the last two seasons have played under COVID rules by sanitising themselves and the ball, they have followed all the protocols to the letter, and we are very proud they have done that,” he said.

Some of the junior sides were very short this week and Ilett expected that would be an issue for sides in future weeks.

He said it would be up to the two clubs involved to come to an agreement in the case of one or more sides being short due to players getting tested and isolating.

“We would decide on a case-by-case basis, we can’t really force a team to play undermanned, this is something that we’re learning as we go, it could be a case of the games being caught up, maybe they play a one off on a Sunday or the points are shared,” Ilett said.