Colts come out on top in T20 showdown 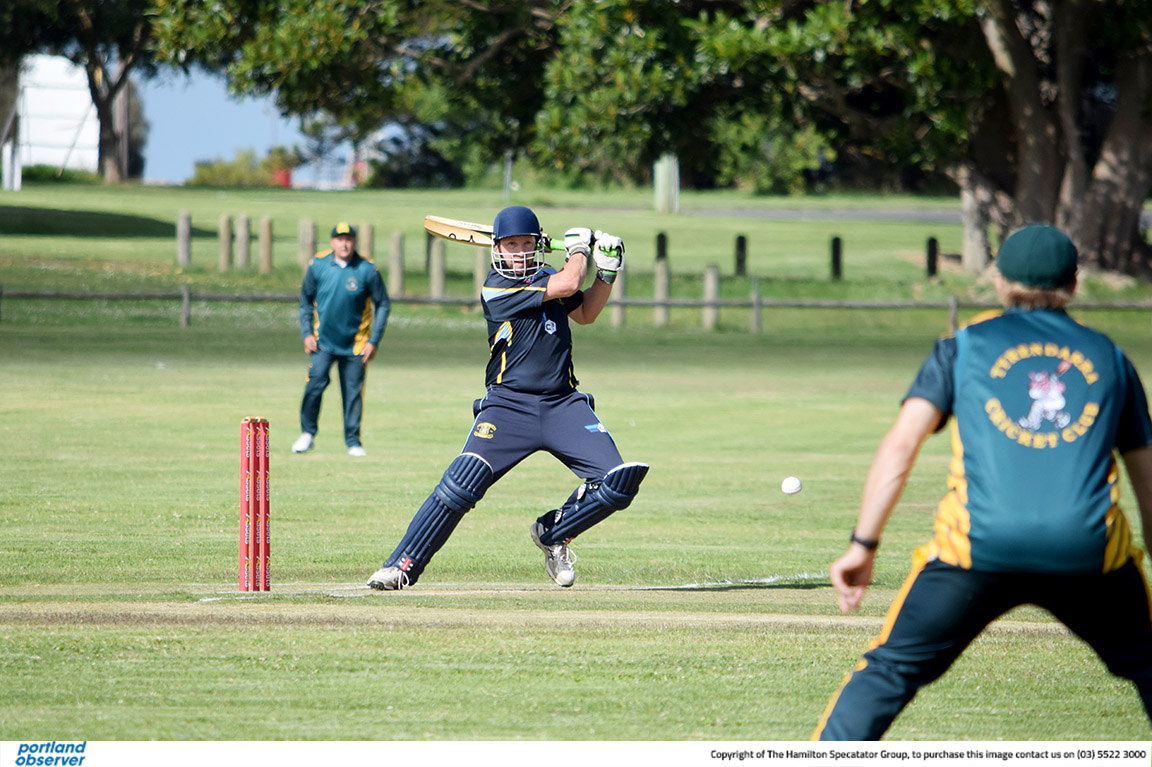 ADAM Barbary was a standout performer for Portland Colts in the Twenty20 grand final on Friday night. Barbary top scored with the bat (27 runs) and was the most damaging bowler (3-12). Picture: OLIVIA COTTIER 210108OC26
By Samuel Ord

PORTLAND Colts are the Portland and District Cricket Association’s top Twenty20 side for the 2020-21 season after defeating Tyrendarra in a grand final match up on Friday.

After finishing in first and second during the five-round regular series through November and December, Colts and Tyrendarra met on the turf wicket at Henty Park on Friday evening to play off for a chance to represent the Association in Warrnambool’s Sungold Cup.

After winning the toss and electing to bat first, Colts set a first innings total of 7-103.

Adam Barbary top scored at the top of the order with 27 runs, while Sam McDonald was handy at first drop with 24 runs.

For Tyrendarra Jack Cocks (2-20) and Dylan Murray (2-26) were the multiple wicket takers, while Lachie Kirk (1-14) was economical with his four overs.

Colts’ total of 103 featured just five boundaries (four fours, one six) and captain Matthew Payne said it was an innings that summarised his team’s approach to the shortest format.

“Colts and Tyrendarra have a pretty similar philosophy I think when it comes to Twenty20 cricket,” he said.

“We both value preserving top order wickets early in the innings, even though it’s brief, and trying to maintain consistent scoring through to the end.

“If you lose clumps of wickets in an innings the scoring tends to really dry up and that can leave you with a score that’s difficult to defend.

“Everyone’s seen a bit of Twenty20 cricket these days and the way teams approach it in the Big Bash League or whatever, but at the local level I think it’s a different game.

“It’s not really about the big flashy shots for us, it’s still about playing quality shots and getting value from them with hard running.

“I like to try and remind the boys that singles are our friends when it comes to batting, and I think one thing I’ve learned going from Twenty20 cricket to regular one-day cricket on a Saturday is that a lot of singles get missed all the time.”

Tyrendarra’s innings got off to a steady start via openers Ben Menzel (12) and Darren Killmister (17), reaching 0-29 before the loss of a wicket.

Following their removal, Jason Pitt (14), Nash Kitt (10) and Cam Mather were all able to get starts (9), however none of Tyrendarra’s batsmen were able to extend those starts into strong scores.

After a maiden from Luke Evans in the 19th over, Tyrendarra headed into the final over requiring 27 runs to win from six deliveries. The team finished at 7-80, 24 runs short.

After top scoring with the bat, Adam Barbary also managed to finish with a match high three wickets (3-12), while Payne was handy (2-17) and Evans crushingly tight (0-8 from four overs).

Payne said he was pleased his team had relied on an even spread of contributors across the Twenty20 series.

“Adam Barbary did exactly what we needed him to do, he worked really hard opening alongside Glenn Hollis and then bowled pretty close to perfectly when it came time to defend,” Payne said.

“Those are just the kind of performances you can get from experienced players who can read the game well and understand the situation the game is in at any given moment.

“Sam McDonald was great too, I was really pleased with the way he batted.

“When it came to bowling consistency has been important for us and guys like Luke Evans and Riley Cook have been exactly that, just reliable and sticking to the plan, and that’s all we can ever ask from them.