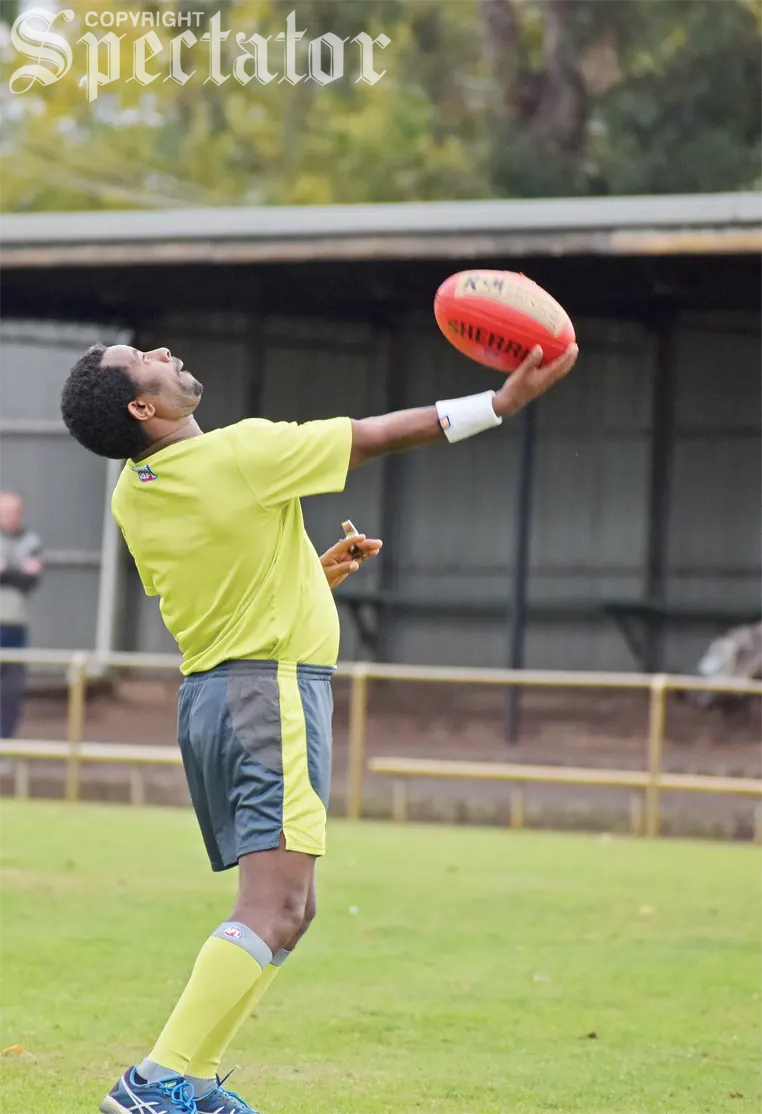 ALEM Gebre’s passion for running has led him to umpiring with plans to go expand his skills even further in the future. Photo: SUPPLIED.
By Adam Hill

UMPIRING Aussie Rules football is hard enough but learning the game at the same time makes it an even bigger challenge.

Western District Umpires Association (WDUA) boundary umpire, Alem Gebre, is doing just that after the 34-year-old joined the association two years ago and has been learning the nuances of the game ever since.

Gebre emigrated from Ethiopia in 2016 and has used umpiring to harness his passion for running, while enjoying the growing involvement in such a unique sport.

“Actually I had no idea about football before I arrived in the country and was in a hotel room and they were playing on tv,” he said.

“I thought it was like soccer, but they were using their hands, so it was confusing for me and so I started to watch it.

“To tell you frankly I wasn’t impressed in the beginning, it wasn’t very technical, it was mainly physical.

“But now I know it is very technical and tactical; to tell you frankly, if I was younger I would actually play the game.

It was a chance meeting with Sam Burns which prompted the 34-year-old to consider taking up umpiring.

The learning process was very quick but the decision to embrace the region’s most popular winter sport is one he does not regret.

“Because I used to run a lot, I made friends with someone from the WDUA and I chatted with him and he said he was looking for umpires and I talked to him about it,” he said.

“He took me to the ground and taught me how to throw the ball in, then after that I started training and at the end of the day I ended up umpiring.

“Sam introduced me to the guys who took training on the Tuesday, I did another training on Thursday and by Saturday I was on the boundary running with someone during a game at Macarthur.

“It was a very quick learning process.”

Gebre, who is a scientist who specialises in crop breeding, continued to learn about the game each week.

“I think the most entertaining part is when I do training in Hamilton and most of the time we finish at 7pm, I always think about what happened during that session and that is the most exciting time,” he said.

“The people, the friends and the feeling after training is amazing.

“I am not perfect umpiring, because it has many rules which change every year, but with things I am doing when boundary umpiring, I understand it very well.”

The 34-year-old has tried to explain the game to his family back home but he said they just get confused.

With a move to Horsham planned soon, the distance he will travel will increase after committing to continuing his umpiring journey at the WDUA.

“I am moving to Horsham, because my job will be there, but I am sure I will come back to Hamilton,” he said.

“I will continue umpiring, I will stay with WDUA; I love these people, I have a great connection with them.

“For the time being I am pretty happy doing boundary umpiring, but I am sure I will move to central one day with more decision making and more interaction.”

Gebre is one of many umpires who will be hoping to be involved in the first football games of 2020, as some junior games are scheduled for Saturday and Sunday.

WDUA president, Geoff Barker said Gebre’s improvement and passion for the game was a testament to the appeal Aussie Rules football has to different people.

“He is a great example of diversity, his happiness and smile is always evident, he doesn’t complain about his umpire appts and he always does his best,” he said.

“He is happy to learn, very polite to everyone and he enjoys training.

“It must not be easy with his wife back in Ethiopia still, so credit to him.”

While the impression WDUA has had on Gebre is immense, it is a two-way relationship.

Barker believes Gebre has also benefitted from getting involved in the game.

“It has given him a sense of belonging to a club and has helped him build friendships around the town,” he said.

“He gets to travel to new places to umpire and also to meet new people which he enjoys.”

Barker’s introduction to Gebre indicated the newcomer’s attitude towards training.

“The first discussion with him was funny,” Barker said.

“I was there and saw him and said hello and asked how he got to know about the association and he said on Facebook.

“I asked if he liked Aussie Rules footy and he said he had never been to a game, had only played rugby and soccer, so when I asked why he came down, his reply was ‘I just like running’.

“It just shows you don’t have to have a football background to pursue umpiring.”

As the association ramps up its training ahead of the start of the shortened junior seasons, Barker said he is hopeful that there will be no further issues which will affect games.

“There are not many games we are doing this year, we are only servicing the Portland Under-18s and the Hamilton Kangaroos games,” he said.

“We don’t want to have to travel too much with all the coronavirus (COVID-19) stuff.

“But we are all ready for games to start.”