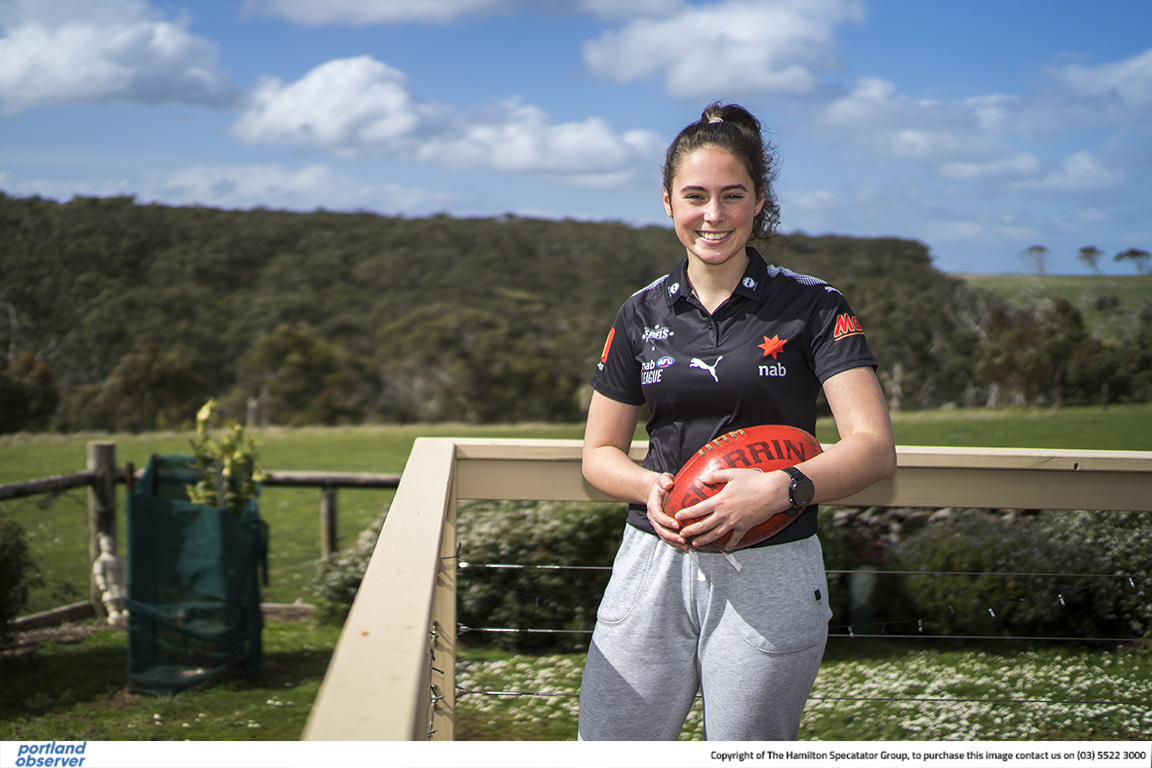 PORTLAND’S Elli Aitken has been selected for another season with the Greater Western Victoria Rebels ahead of the launch of the 2021 NAB League season this weekend.

17-year-old Aitken has experienced a rough introduction to the world of representative football after missing all of the 2019 season due to a shoulder injury and the majority of the 2020 season due to the coronavirus pandemic.

After a busy summer preseason schedule, Greater Western Victoria finalised its 2021 girls squad on Monday and Aitken was one of 35 players named.

The NAB League girls competition debuted in 2017 as a five-round competition, and in 2021 will consist of a nine-round season which begins this Sunday for the Rebels with a clash against Geelong Falcons.

That match will take place at Deakin University in Geelong, beginning at 11am.

Aitken, who is currently undertaking her VCE studies at Portland Secondary College, said all signs were promising heading into a new season.

“I think everyone’s really excited to get the season underway, I know I definitely am,” she said.

“We’ve got a handful of new players but the majority of the squad is the same as last year, which means we’ve had all this extra time to get to know one another and build a pretty strong bond.

“My shoulder surgery and then rehab after went really well last year so I’m feeling good about where my game is at personally, I’m feeling really fit, my main focus has just been skills.

The NAB League Girls Testing Day was hosted in Melbourne on Sunday and Aitken and the rest of the Rebels squad made the journey to examine their physical metrics.

Testing Day puts players through a series of tests which evaluate a player’s performance in areas like speed, ability, strength and endurance.

Aitken said she was pleased with how her team performed.

“I think everyone was a bit nervous getting onto the bus and heading off but it ended up being another great bonding experience,” she said.

Greater Western Victoria has a new look coaching structure for 2021, with the staff no longer divided into a girls department and a boys department.

Senior coach David Loader, who comes to the role after coaching North Melbourne’s VFL team, is coach of both teams.

Aitken said so far in 2021 she was over the moon with the quality of coaching made available.

“It’s really been a season like nothing I’ve experienced before,” she said.

“Because of the change to the structure of the club, our team is getting leadership like we’ve never had before and it’s a really special thing to be a part of.

“No matter where you are at the club, at training, at a testing day, a practice match, wherever, you always feel like there’s at least one person nearby who you can go to for advice or guidance or whatever you need, we’ve got an amazing level of support.

“It’s something I’m really grateful for, and that’s been kind of my main focus lately, making sure I’m showing gratitude for the good things that are happening.

“Whether it’s just being back at training or playing in a practice match, I’m just really grateful footy is back after everything that happened last year.”

After Greater Western Victoria’s clash with Geelong Falcons on Sunday, the Rebels will face Bendigo Pioneers in round two on Sunday, February 14.