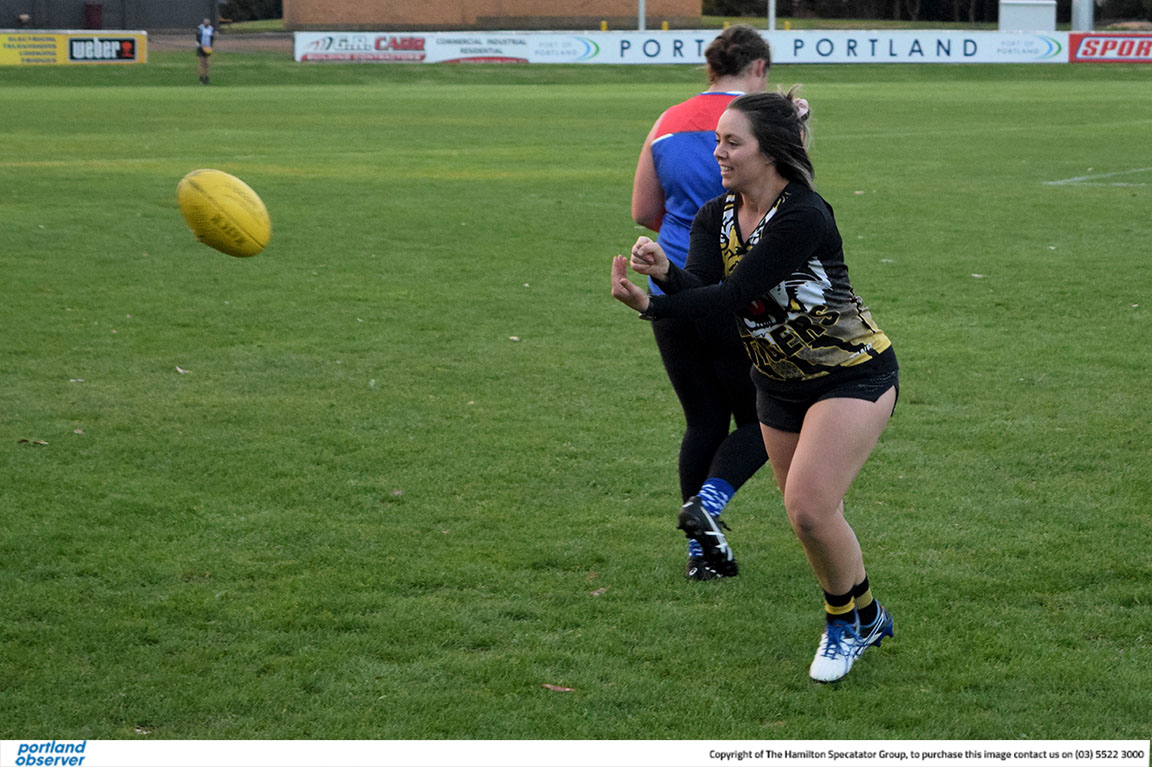 PORTLAND’S captain Sarah Pedrazzi in action on Tuesday evening at Hanlon Park ahead of round one of the Western Victoria Female Football League season. The Tigers are off to Melville Oval on Sunday to face Hamilton Kangaroos at both the senior and under-18 level. Picture: OLIVIA COTTIER 210412OC13
By Samuel Ord

THE Western Victoria Female Football League’s 2021 season kicks off on Sunday and Portland’s two teams are chomping at the bit to get started.

Portland’s under-18 team, which will be captained by Paije Rose-Maher, are off to Melville Oval to face Hamilton Kangaroos on Sunday in a match beginning at 11am.

Portland’s senior team, which will be once again captained by Sarah Pedrazzi, will then follow them up by facing the Kangaroos at 12.30pm at the same venue.

Portland’s under-18 team is being coached by Mark Conheady.

Portland’s senior team is being coached by Damien Bell and in the lead up to round one, he said the team was buzzing with anticipation.

“I think everyone is really excited for our first game,” Bell said.

“We were training last year when restrictions allowed it, so this game has been more than a year in the making for quite a few of the girls so they’re really keen to get out there.

“We’re definitely aiming to be playing in the last game of the season.

We showed the last season (2019) that we played that we’re competent at the level and we’ve been constantly improving since then.”

The 2019 season was indeed a memorable one for the Tigers.

Playing in what was then known as the Deakin University Female Football League, the Tigers made it through to a grand final clash with South Warrnambool but fell narrowly short of premiership success.

Building enthusiasm for community sport and maintaining participation rates has been difficult for a number of local codes and women’s football has been no exception to this.

When the WVFFL first released its fixture for the 2021 season back in February the league was proud to announce a growth in teams at both the senior and under-18 level.

Bell said the Tigers were well-positioned in terms of numbers on the eve of the season but said his club hadn’t been immune to issues with player enthusiasm.

“We started training again at the start of this year and played a practice match late in January,” he said.

“It was really good to have an early hit out which was especially very helpful for our new players.

“Unfortunately since then we’ve lost a bit of our momentum in terms of numbers at training.

“The quality of our work at training though, has been quite good.

“We’ve possibly had a few players that have lost interest after the COVID-19 break, but overall I think we’ve been pretty lucky.”

Portland made a women’s football debut in 2017 as a founding member of the DUFFL.

Bell has coached the Tigers at the senior level each season, with the exception of 2020 which was lost due to the coronavirus pandemic, and said that his time prided itself on fighting hard to win possession in tight spots.

“Contested ball has always been a strength of ours,” he said.

“We’re hoping to be able to maintain that.

“We’re improving our skills and outside spread and run, so we’re hoping that can also be a feature of our game.”