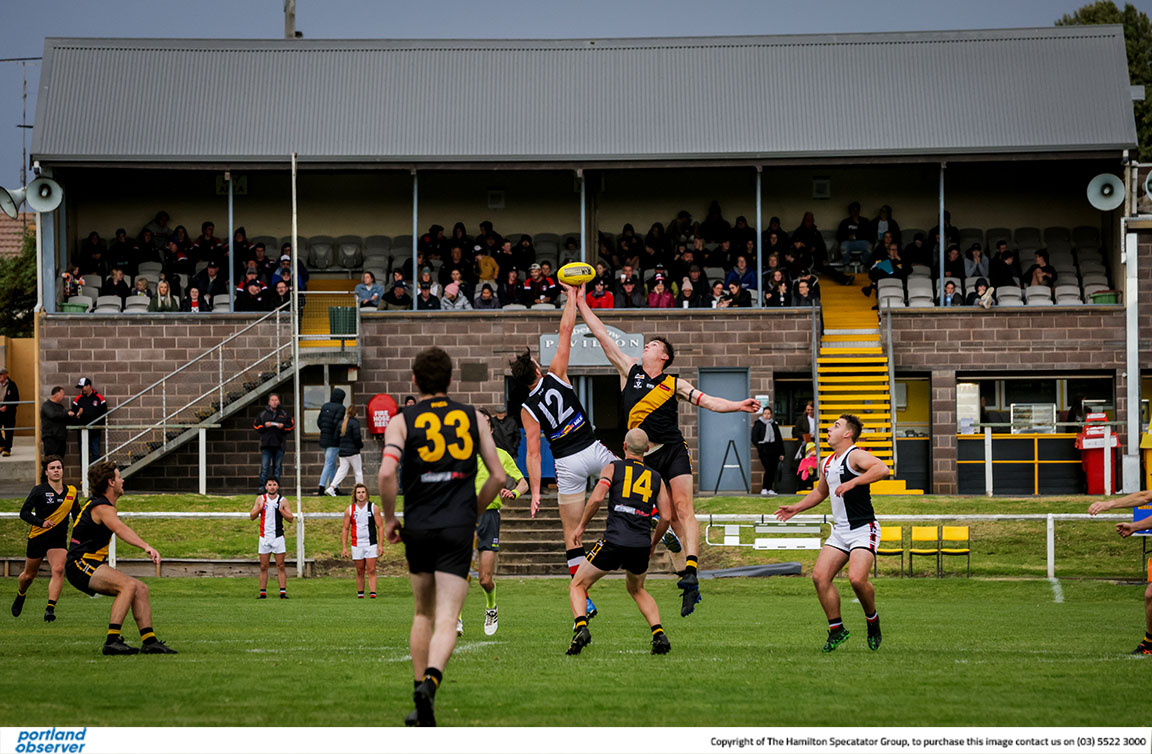 THE Portland Tigers played their first Hampden Football League match in 18 months on Saturday and while they were outpaced by a superior Koroit outfit, not a single onlooker could fault their effort.

It was a wild and windy night at Hanlon Park, with rain lashing down for most of the game and the ball slipping and sliding through hands and feet when it was in the air or on the ground.

Both sides struggled to score for large parts of the game, and Portland, unfortunately, were kept scoreless for the second half.

The Tigers tackled ferociously and continued to attack the game, even after the scoreboard told them they were out of it.

Koroit were up by 15 points (27-12) at quarter time after beginning the game kicking against the wind, to the Blair Street end.

Portland’s goals were scored by Kyle Richardson and Sam Hampshire.

Hampshire’s was particularly impressive, a set shot from outside the 50-metre arc on a 45-degree angle.

Despite continued courageous efforts from the Tigers, however, the Koroit’s lead would only increase.

The Saints kicked another four goals in the second quarter to Portland’s one, and while Portland’s tackling pressure was immense and their ability to win stoppages were good, both sides were let down by basic skill errors due to the wet conditions.

Portland’s entries inside 50 in particular let them down, with Koroit’s back six able to shut down most attempts at goal.

Koroit led 54-19 at half time, with the game looking like slipping far from the reach of the Tigers.

Conditions made scoring hard, with only two goals being kicked in the third.

Daniel Jackson and David Denboer were stellar in defence for the Tigers, who would have been lost in midfield without Ben Malcolm’s quality ruckwork.

Koroit had the wind in the last quarter, however, and the game became more one-sided.

They kicked six goals to extend their lead to 91 by the end of the match.

With two minutes to go in the last quarter, Denboer made a stunning, aggressive tackle while defending in the back pocket, getting the Koroit player to the ground, and earning a well-deserved free kick.

This summed up Portland’s game: defending most of the time and putting up a gallant fight until the very end.

Tigers’ coach Jarrod Holt, while disappointed with the result, was more than happy with the effort his side put in.

“I thought we were competitive early…I think their more mature bodies kept going harder at the footy and we probably let the foot off a little bit, and they ran away with it,” Holt said.

“We’ll definitely learn a lot from it, which is the main thing, to just keep learning and getting better as the year goes on.

“You’re never happy if you lose, and I thought it was always going to be tough… I’m stoked that the players went out and had a crack, and that’s all that I can ask.

“I’m reasonably happy (with Portland’s performance), but I would’ve liked the scoreboard to be a bit more competitive.”