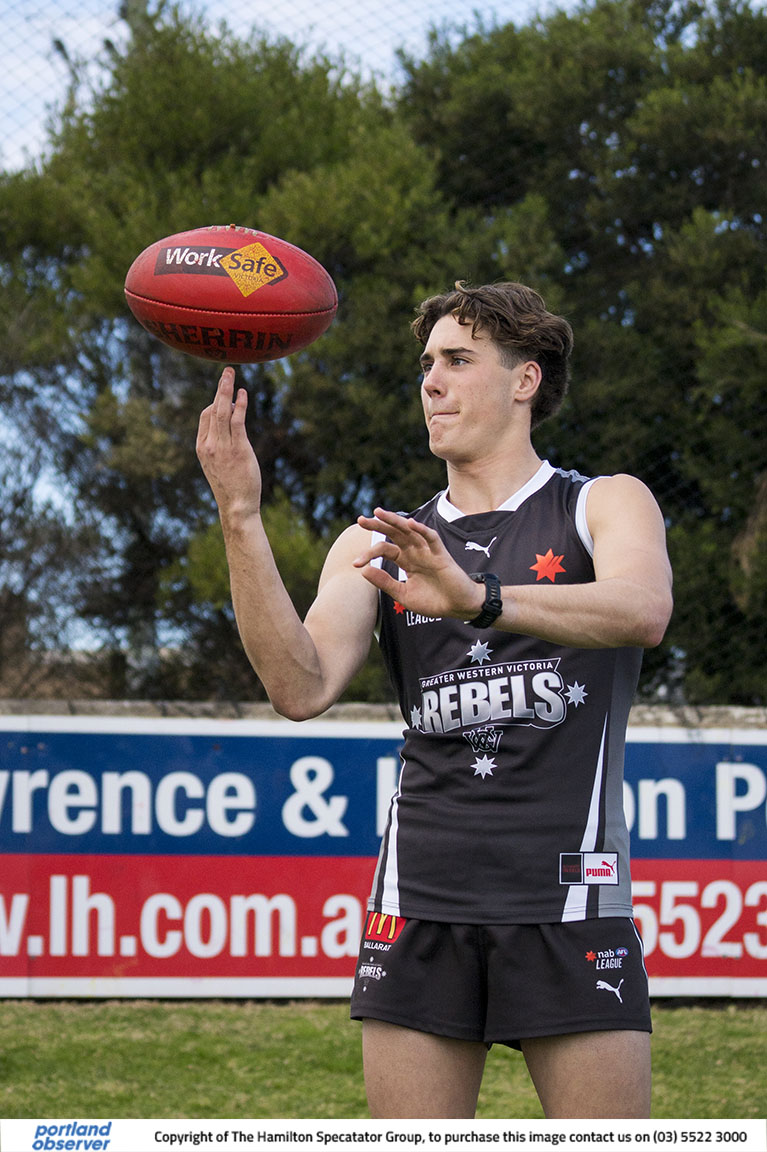 PLAYING for Portland, playing for Greater Western Victoria, VCE studies and now more uncertainty with the coronavirus pandemic has left Jamo Ballantyne with a busy schedule – but he’s loving the challenge and is keen to take his game to the next level. Picture: TRACY BOTICA 210602TB23
By Samuel Ord

Splitting his time between Greater Western Victoria in the NAB League and Portland in the Hampden Football League, Ballantyne has played seven matches this year and is yet to reach a final siren without a win.

Ballantyne is one of 33 members of Greater Western Victoria’s NAB League under-19 team this season – Portland’s only representative in the squad – and the Rebels have kicked off the year in an explosive fashion.

They sank their teeth into Geelong Falcons on April 1, winning by 23 points, to get the ball rolling, and carried that confidence into their second match, a nine-point win against Dandenong Stingrays on April 11.

Murray Bushrangers was next up on the chopping block, defeated by the Rebels by 11 points on April 18, and the streak continued with Eastern Ranges on May 23, defeated by 38 points.

The atmosphere at MARS Stadium in Ballarat is high right now and Ballantyne said it was an exciting system to be a part of.

“Four wins on the board early in any season is always good and it creates a real drive within the group,” he said.

“Every Thursday when we get together as a whole group to train the energy has been really up and about, we’re just really invested into improving and growing as a whole unit, exactly how you’d expect a footy club to be when you’ve had a 4-0 start to the season.

“We probably haven’t quite started games how we would have liked to and have had to work hard to chase teams down.

“That’s a credit to us to be able to do that but being switched on and ready to go right from the start is something we as a playing group and the coaching staff are really striving to achieve.”

Stability and by extension success, has been difficult to achieve for Greater Western Victoria within the NAB League competition, which started in 1992 as the Victorian State Football League, became the TAC Cup and most recently was rebranded in 2018.

Greater Western Victoria underwent a rebranding at the same time, changing from the North Ballarat Rebels to the GWV Rebels in order to better reflect an expanded recruiting zone.

After four consecutive wins however there’s a real buzz around the Rebels and Ballantyne has been a pivotal contributor.

Playing through the centre of the ground, Ballantyne collected 15 disposals against the Falcons and 12 against the Stingrays and found more of the ball in the win against Eastern Ranges (21 disposals) and Bushrangers (22 disposals).

“There definitely is a different feel to this year at the Rebels more so than any other years I’ve been part of the program,” Ballantyne said.

“As a whole group we are connecting with each other really well on and off the field and it’s great to build that chemistry.

“I think everyone is so glad to be back playing footy, whether that’s at local level or at NAB League.

“After last year missing a whole year off it was very challenging and it’s a credit to the group we have that stayed motivated and was ready to come out firing this year in 2021.

“Our game style is something we’ve been working very hard on. I think it’s starting to come together better each week.

“It’s something we pride ourselves on, being able to slow the pace of the game down and use the ball well by foot in our back half to give ourselves every opportunity going forward. And then when it’s time to go we’re a team that loves to run for each other and we can move the ball very quickly by hand and then by foot to deliver to a key forward.

“Being able to control that tempo of the game is something that we’ve been trying to implement and at the moment I think it’s working.”