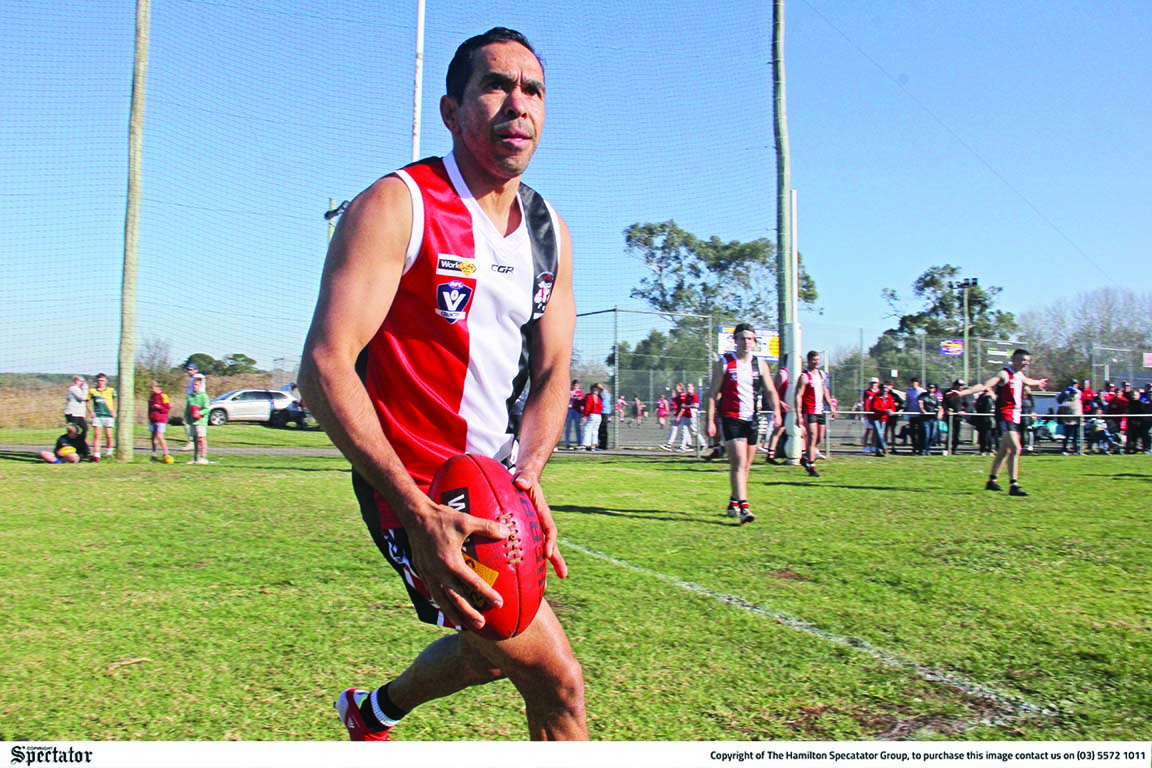 EDDIE Betts attracted a crowd of more than 4000 at Branxholme Recreation Reserve on Sunday. Photo: MARK RABICH.
By Adam Hill

IT was bigger than a grand final, with a massive crowd descending on Branxholme Recreation Reserve for a once-in-a-lifetime chance to watch Eddie Betts in the South West District Football Netball League (SWDFNL).

The former AFL player was swamped on arrival and was treated like a rockstar, with people of all ages getting signatures and photos with the popular player, before he took to the field and put on a show for the more than 4000 people in attendance.
After a tough start to the season, the Saints’ home ground was buzzing with Betts telling The Spectator he was excited to be part of the Carlton Draft initiative.
“It is just a great turnout by everyone, it is good for the community to come and enjoy this event,” he said.
“I think I enjoy community football a bit more, it is a family environment and AFL is pretty serious.
“Sir Doug Nicholls Round is an amazing round, I was kind of wishing I was out there playing for this round, so to go out on the same weekend is special.
“I think just giving back to grassroots footy and giving back to the locals, especially here in Victoria.”
Ben Kamp was the Branxholme-Wallacedale person who filled out the initial application to get involved, which eventually proved successful.
He said to see it come to fruition and see the result was a good reward for all the effort behind the scenes “Now that it is here, it is unreal,” he said.
“The fog was over the ground this morning then it lifted and next minute Eddie has walked into the club and there is a real buzz around the ground.
“I just saw there was an opportunity to find a bit of an avenue to boost the club, just to get us up there and keep it going.
“With Eddie coming onboard, there has been a lot more smiles around the club.”
SWDFNL president, Darren Jacobson said the day would help to boost morale and also raise the league’s profile.
“Branxholme-Wallacedale has done a fantastic job, it just brings good PR work and it showcases our league,” he said.
“It gets us out there, we just want people to play footy and get the community back together and this is a great way to do that.”
Betts said after the game that he thought the day was a big success and would get involved in the initiative again if it continued next year.
“As a community sense, it did live up to my expectations, we didn’t get the win but it was fantastic for the community and everyone from Heywood to Mount Gambier to Hamilton,” he said.
“It was hard not to look out in the crowd with kids shouting my name, Leon Davis was out in the pocket yelling out as well, so it was good to see a familiar face.
“For a struggling club, it is fantastic and hopefully this can put them on the map a bit more.
“People wanted to see me kick goals and that is what I tried to do.
“I think they will remember this forever.”