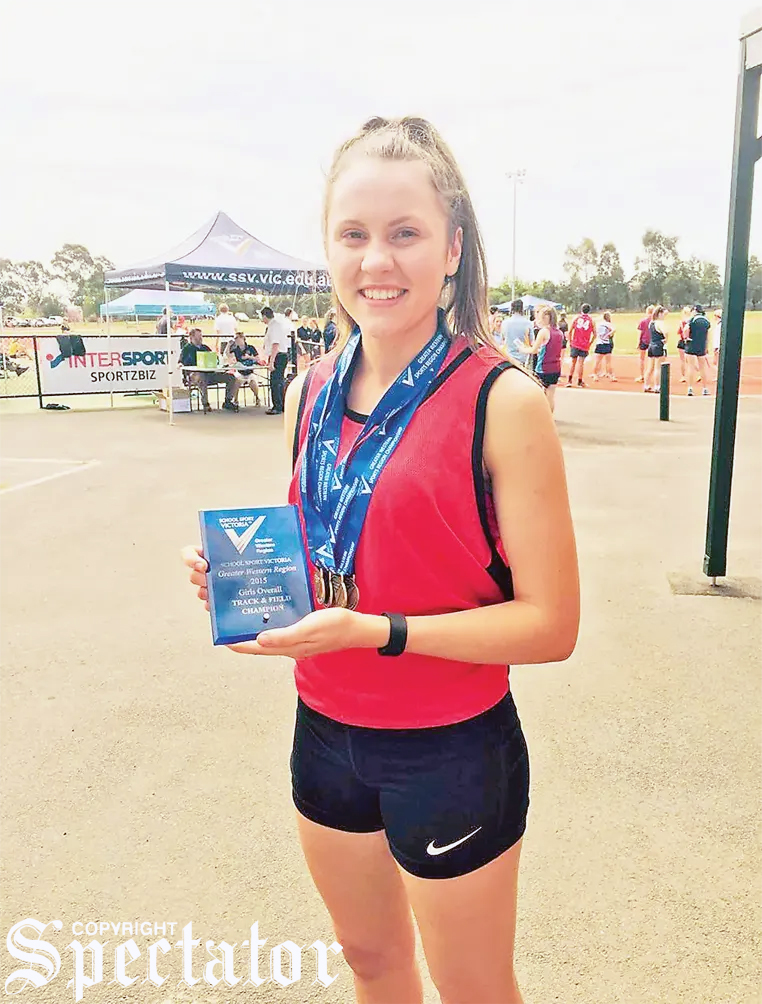 A PROMISING netballer and a gifted athlete, Mikaylah Beavis was one of Hamilton’s most exciting prospects before she made the move to Ballarat for university.

She played netball at Branxholme-Wallacedale, Coleraine and the Hamilton Kangaroos and wherever she went, success followed.

A tough and quick defender, Beavis won several best and fairest awards at each club and added a touch of class to every team she played for.

Her junior career saw her play at Branxholme-Wallacedale and Hamilton, but her first taste of senior netball was with the Saints.

Beavis worked her way up the ranks and eventually into the A grade side where she was a mainstay and one of the team’s better players.

After winning Branxholme-Wallacedale’s A grade best-and-fairest in 2015, she along with good friend, Ellie Dufty, made the move across to Coleraine.

She played a further two years with the Maroons, winning the A grade best-and-fairest in 2016 before captaining the club in 2017.

She also got her first taste of coaching at Coleraine, as she led the Under-17 team to a premiership, the first she was involved in.

Beavis’ local career finished at the Hamilton Kangaroos where she played in the division one team during the 2018 season.

A broken nose saw the defender miss two weeks while the team played finals, but was unable to go all the way.

If she wasn’t working on her netball, you could bet Beavis would be either training for her track and field events or in the gym, continuously growing as an athlete.

During her time at Baimbridge College, Beavis was a constant feature at the inter-school athletics, taking her talent well beyond the local schools.

While she would feature at zone and state levels yearly, Beavis got the opportunity to compete in Canada, displaying just how good she was.

Despite her impressive sporting resume, it took a back seat as university took priority despite venturing to a Geelong club.

“Currently I’m not playing any netball, I took last season off and it was the first year I’ve had off since Net Set Go,” she said.

“I enjoyed having my weekends back and not having to be training in the rain on a Thursday night, but I did miss the fitness I gained from sport and the social side.

“I went to one pre-season in Geelong, but I didn’t really like the fit and feel of the club I decided not to play which I thought I’d regret, but I didn’t.”

The modest Beavis said one of her highlights was her trip to Canada where she pinned herself against some of the best young athletes the world had to offer.

“My biggest highlight was travelling to Canada for an athletics tour,” she said.

“We had two international meets in which I took away a few ribbons and medals.

“My main events were long jump, high jump, triple jump and the 100 metres.

“I was fortunate enough to travel with Jen McArthur and made some close friends that I’m still in touch with and see frequently.”

There was no doubting Beavis’ talent, but her training and mental strength was a strong attribute that wasn’t often recognised.

It was on full display one day at the Victorian All Schools athletics where she fell sick the night before and considered pulling out, luckily for her, she pushed through.

“In 2015, I attended the Victorian All Schools, I remember having tonsillitis and the worst fever the night before, I couldn’t eat my tea,” Beavis said.

“Mum and I discussed pulling out, but we had driven down and paid the entry fees so we may as well see how I felt in the morning.

“I managed to get a silver in the long jump, bronze in triple jump and bronze in high jump.

“I didn’t get any PB’s, but I guess I got a bit lucky with my events.”

Now that she isn’t playing sport, Beavis’ attention is focused on health and fitness as she continues to learn at Federation University.

Studying exercise and sport science was an eye-opener for Beavis, allowing her to find which areas of the fitness department she wanted to be involved with.

“I started my bachelor in exercise and sports science and anyone who has studied it knows exactly how broad of a degree it is,” she said.

“It covers everything from massages, to aquatic classes, biomechanics, psychology, nutrition and so on.

“I knew there were a few classes I really enjoyed and it also made me realise that I’m not as interested in some areas.”

During her studies, she has been exposed to some of the top sporting environments, including a top soccer club in Ballarat and the Geelong Football Club’s AFLW team.

“While studying I completed some placement hours working as an assistant rehabilitation coach for the Ballarat City NPL2 Football Club,” Beavis said.

“I never had any exposure to soccer before so that was really interesting, and I got a lot out of it.

“I then also worked as a strength and condition coach for the Nab League, GWV Rebel’s women’s team in 2018.

“I found this so rewarding and loved working with young aspiring athletes in a sport where it is still developing.”

Currently studying her master in strength and condition, an opportunity opened up for Beavis to work in an AFLW environment, a position she has loved.

“My masters is aimed at working with elite athletes and creating strength and condition programs,” she said.

“It also involves a project in which I have been working alongside the Geelong cats AFLW team.”

Upon completing her degree, Beavis will look to continue in the professional sporting field to further her career.

“After I have eventually completed my second degree, I hope to continue on in the elite sporting field,” she said.

“Ideally I have a big interest in women’s sport or younger athletes.

“I would be happy working with any athlete of any sport, as you can imagine it is quite a competitive field and industry to be a part of, so while I’m fresh out of uni I would be happy with anything.

“I guess long-term, working in a team sport environment would be preferred, such as an AFLW side.

“I have thoroughly enjoyed being part of the Cats club and working with all the girls so that has definitely sparked my interest.”