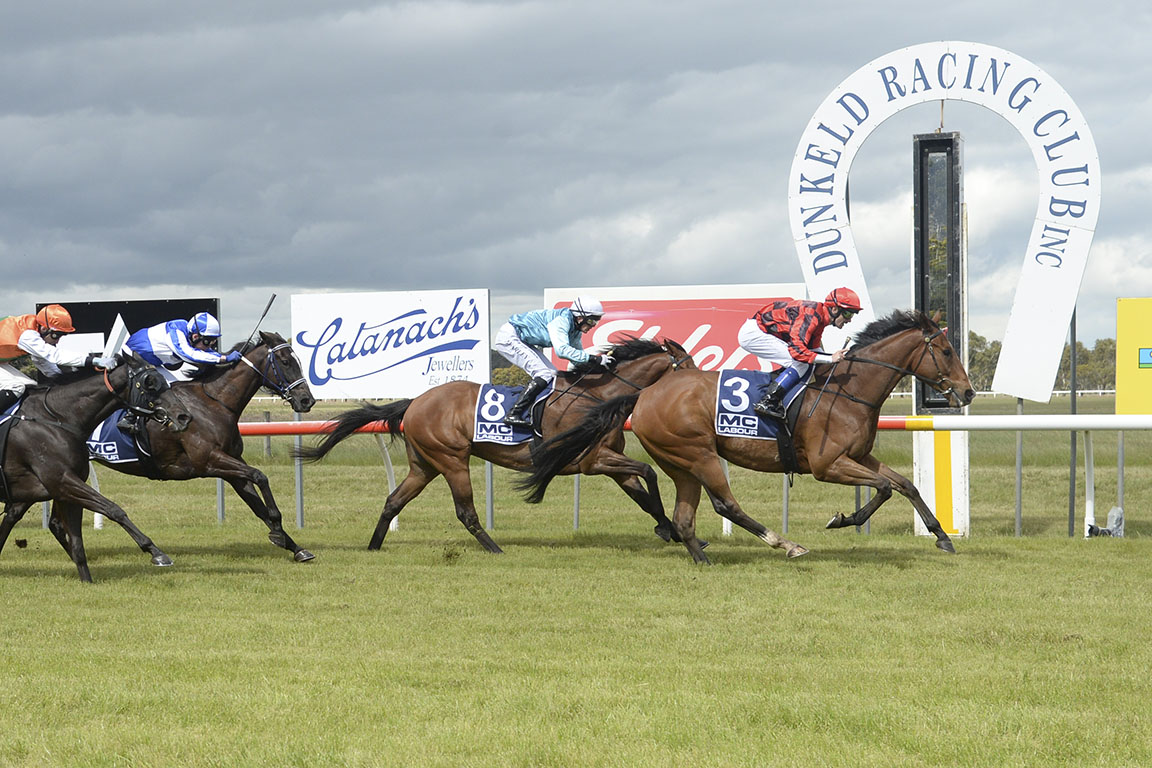 BARRY The Baptist added another country cup to his resume with a strong victory in Saturday’s $50,000 Dunkeld Cup.

The veteran galloper, trained at Stawell by Paul Jones, added the Dunkeld feature to previous wins in the Stawell, Apsley and Sheep Hill Cups.

His latest win has taken a while with a tendon injury then recent bad luck, meaning it was his first success since the Apsley Cup in June 2019.
Now boasting eight career wins and multiple placings in other cups, including Hamilton in 2018, the durable eight-year-old has lifted his prizemoney to just over $470,000.
With recent rains rendering the track a Heavy9, the son of Hard Spun was presented with a surface he relishes.
The race panned out perfectly with Jason Benbow able to take a sit behind pacemakers and eventual placegetters, Mangione and Chapel Lane, for most of the race.
Despite a mid-race move by Nordic Symphony, the leading trio were able to regain composure rounding the home turn, with Barry The Baptist claiming and edging out Mangione by three quarters of a length, with Chapel Lane just holding out Morton’s Fork for third a further length and a quarter back.
Starting a $2.60 favourite, the cup winner was one of six favourites to win at the meeting.
On a day where riding and training honours were shared evenly across the day, a couple of winners stood out.
Tony and Calvin McEvoy produced first starter, Bill The Boxer, to win the Elders Maiden Plate in a strong effort, while Matt Cumani’s Apsara was one the easier winners in the MC Security 4YO+ Maiden Plate.
Will Gordon, rider of Apsara, had one of those ‘nearly’ days with four second placings in other races.
Trainers Lindsey Smith and Andrew Bobbin could claim the same ‘unluckiness’ with three second placings as well.
Symon Wilde also produced a nice winner in Kaakit Akit, successful in the Carrazzo Consulting BM64 Handicap over 1000m.
Formerly trained in New South Wales by Gai Waterhouse and Adrian Bott, the four-year-old daughter of Artie Schiller look set to be competitive in similar races across the summer months.
Tom Dabernig continued his great run of success since locating to Warrnambool, winning the Ararat Meat Exports 3YO Maiden Plate with Swift Sister thanks to a lovely Harry Grace ride.
Yulong Knight made it back-to-back wins with victory in the high-class race of the meeting while Pride Of Kinross broke a run of twelve outs with his second career win in the XXXX Gold 0-58 Handicap over the cup trip of 1800m.
The meeting was rounded out with a nice win by Unlimited Ability trained by Bob and Kane Post from Mount Gambier.
Ridden by Kane Post’s wife, Kate Walters, the gelding scored nicely as a $2.90 favourite in the Odds Drift Protector 0-58 Handicap over 1200m.