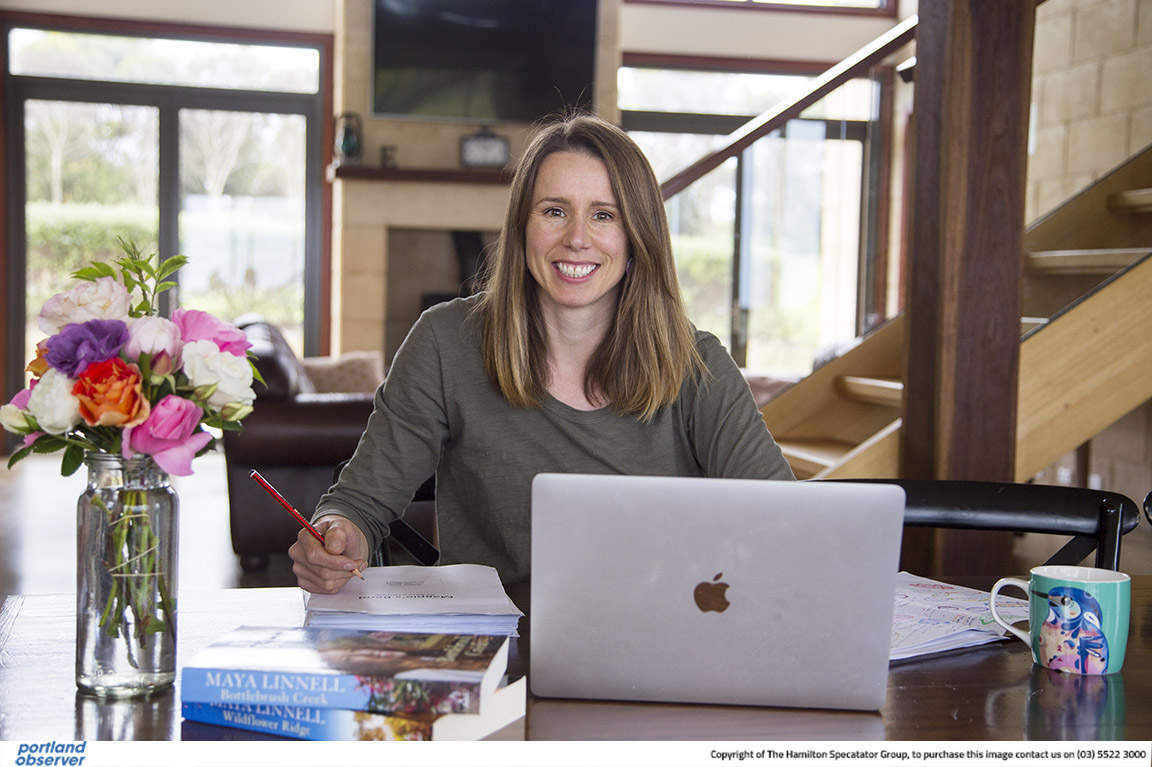 NARRAWONG author Maya Linnell is welcoming in 2021 with edits to her third novel and is preparing two more for release in 2022 and 2023 as well. Picture: LEESA COOK 201105lc19
By Angela McFeeters

HARD-WORKING Narrawong author Maya Linnell is looking forward to another exciting year ahead of the release of her third novel and preparations for two more.

Last year she locked in a contract with publishers Allen and Unwin to publish two more books.

The first is a novel about a fourth McIntyre sister, Diana, which will be released next year and continues Ms Linnell’s journey of releasing one book a year since 2019.

Her McIntyre-clan books can be read independently, but follow the intertwined lives of the sisters in contemporary Australia; so far they have all been based in fictional locations with features borrowed the wider Portland region.

Then in 2023 Ms Linnell is set to leave the McIntyres behind and release a new rural romance with a whole new set of characters.

The new 2020 contract was a coup for the dedicated writer, who was acknowledged as among the top three best-selling romance authors in 2019 and last year for her first two novels Wildflower Ridge and Bottlebrush Creek respectively (according to The Sunday Age).

Ms Linnell said she is just grateful she has been able to continue her writing career during this challenging time – when many other people had felt economic hardship and real employment uncertainty.

“Pallets of books were being sent back to publishers” at the beginning of COVID-19, she said, threatening the prospects for future book-signings.

However, there was soon a turnaround when people decided books would be a great escape, and book sales in Australia went up 4% year-on-year according to Nielsen Book Scan.

Not that 2020 was been without its peaks and troughs for her work.

With all three of her primary school-aged children schooling from home for the best part of 2020, it became hard for her to focus during her usual working hours – school time – when the children often needed assistance.

Nevertheless, with their support and the support of her husband Jason Eats she managed to squeeze in 30 Zoom launches over a few months to promote her second novel, Bottlebrush Creek, and discovered there had been 1000 views of an interview she did with someone from Queensland’s Gold Coast.

“I’d never get 1000 people at an in-person event, so that’s been really good actually,” she said.

She also hosted online events beaming across Australia, including in Western Australia.

Ms Linnell doesn’t have a manager breathing down her neck each day, but knows she has to be focused on writing, editing or promoting her own novels, preparing her popular Romance Writers Australia blog (which features interviews with other authors) or judging competitions.

“While it’s hard not to procrastinate, I am very determined and I do sit at the computer when the kids go to school until they return: I treat this as a full-time job and it is, otherwise you would get further away every day.

“I do think it’s a lot easier to write when you don’t have a house full of people,” she added, noting that she was able to switch her day to more short-focus tasks during lockdown school days and got up earlier to let her creative juices flow while the house was quieter.

While she can have all the hours of her day organised, her stories often still take on a life of their own when they are in their early stages.

“I start with my characters and setting, but sometimes I don’t know what I’m trying to say in my book until I’ve said it,” she laughed.

“I really enjoy seeing the world you’ve created in your head – that you have spent so much time building – being out there for others.”

Wildflower Ridge was about a busy professional woman brought home to the family farm by circumstance, and Bottlebrush Creek about a family taking on a new life together in a regional town by the sea and – with some complex home renovations thrown into the mix.

Magpie’s Bend about Lara McIntyre will be out in June, and is in its second round of editing now.

Diana McIntyre’s story – which is yet to be named – will follow an interesting plot line including family dramas and the importing of cut flowers to Australia.

“By the time I have finished those four books I’d have written half a million words on the McIntyre sisters.”

As for her fifth published novel, expect that the winery region of eastern South Australia – where Ms Linnell is originally from – could be included.

Ms Linnell is now enjoying a short burst of family-free respite to focus on her editing, and is looking forward to more contact and feedback from readers in the coming months.

She recalls one woman who told her she had been receiving chemotherapy, and that her books had been a great distraction through the challenging time.

“It’s so, so nice – that feedback; people from all over Australia letting me know they’re reading my books.”