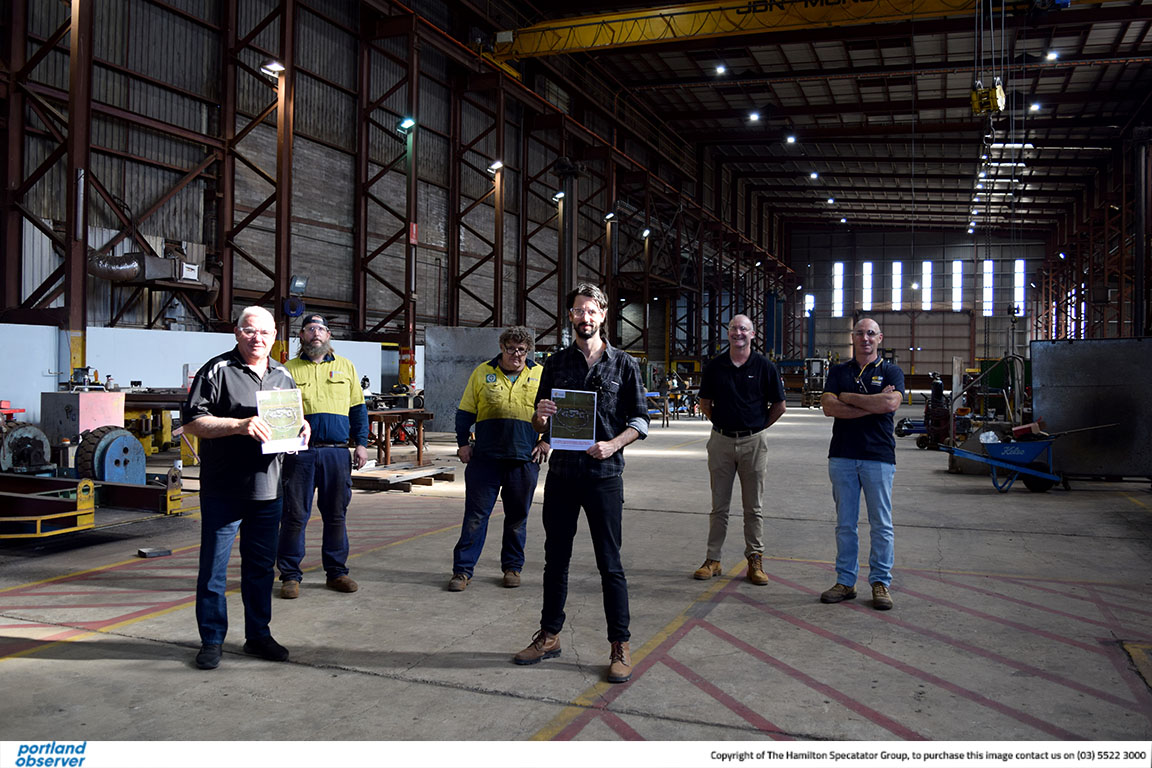 KEPPEL Prince Engineering would like this workshop to be a lot busier than it is and its lack of use means 42 staff were laid off at the company this week. Pictured at the launch of a report last month to argue for the importance of local manufacturing jobs in the renewable energy industry are Keppel Prince executive director Steve Garner, employees Patrick Hodges and Carey Wakely, report author Leigh Ewbank of Friends of the Earth, Keppel Prince general manager Dan McKinna and Australian Workers’ Union organiser Rob Saunders. Picture: OLIVIA COTTIER 210219oc01
By Chalpat Sonti

KEPPEL Prince Engineering has been warning for months that many of its workers’ jobs were at risk if it could not find more wind tower work, and those warnings became reality on Wednesday when 42 staff took redundancy packages.

The cuts were across the Portland company, with 16 staff across all divisions accepting voluntary redundancy, and a further 26 forced redundancies in the wind tower division.

And while the company is now pinning its hopes on one more work contract to save other jobs, unions will take the battle to federal politicians, demonstrating in front of Federal Member for Wannon Dan Tehan’s Warrnambool office today and a delegation, including a newly redundant worker, will got to Canberra early next week.

Further putting pressure on the company is the ongoing uncertainty around the Portland Aluminium smelter deal.

Keppel Prince put out an expression of interest last week for voluntary redundancies, and those who took them included at least one senior manager and administration staff, all with decades of experience.

However, those numbers weren’t enough, and the remainder came out of the wind tower division.

It has been struggling for work since the end of the first round of the Victorian Renewable Energy Target projects, which mandate local content in the likes of wind farms, and with stage two of the VRET not due to be released until later this year, executive director Steve Garner said there was little choice.

“It is disappointing,” he said.

“Some of them are long term workers, some in excess of 30 years.

“Some (of the voluntary redundancies) were looking to retire, and they decided to save some young people and go themselves.

“We wanted to do it (voluntary redundancies) across the company to make it fair to everyone, even though the real problem is obviously in the tower facility.”

That division was now down to about 100 workers.

The issue of getting work outside the VRET became apparent in the middle of last year, when Keppel Prince lost out on further work at the Murra Warra wind farm near Horsham, a project managed by global giant GE, despite state government help to be competitive on price and having worked on the project previously.

And it worsened when the company recently lost out on the contract to supply the proposed Ryan Corner wind farm near Port Fairy, managed by another multinational in GPG.

It was that contract that hurt more, given much of the offtake of the farm has been sold to the federal government-owned Snowy Hydro 2.0 project.

But Mr Garner said he still held out some hope that there could be some work for Keppel Prince at Ryan Corner.

“I’ve suggested to Snowy Hydro that it’s not too late, Vestas (which is supplying the turbines) could always be directed to change.

“They won’t be building them for another few months anyway.”

The major hope though was the Woolsthorpe Wind Farm, being managed by yet another multinational in Siemens, and which has an agreement to sell all its power to Snowy Hydro.

“We’re really shooting for the stars to try and get Woolsthorpe over the line,” Mr Garner said.

“We haven’t given up on that or Ryan Corner yet.”