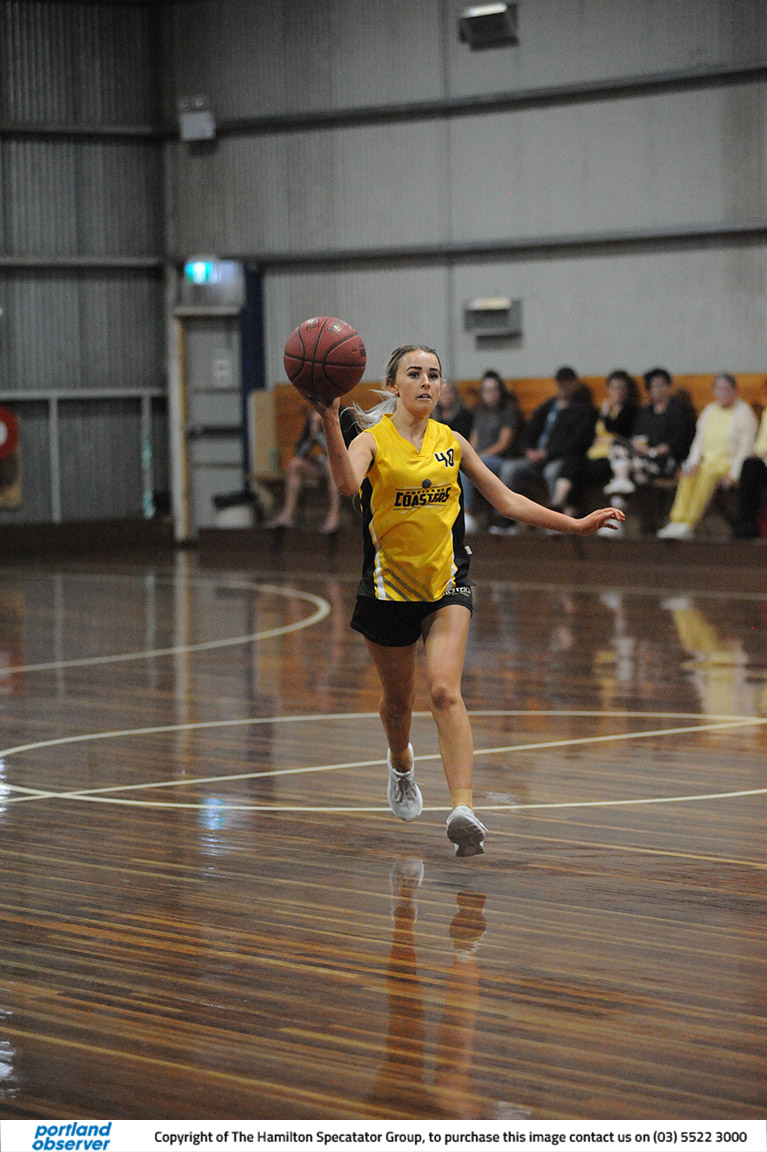 IT was all hands on deck for the Portland Basketball Association this weekend with the Junior South West Classic bringing more than 60 teams onto local courts for three days of representative action. Portland was well represented, with Alexzia Petch and her team taking away grand final win in the under-18 girls team. More details in Tuesday's Observer Picture: BILLY EASSON 210130bj039
By Samuel Ord

IT’S been a Portland Junior South West Classic to remember for the Portland Coasters’ girls teams, with all four local teams winning their respective divisional grand finals after three days of play.

Portland’s most senior group, the under-18 girls, raced through the regular rounds of play unrivalled, defeating Warrnambool Mermaids, Casterton and Horsham in succession.

In a semi-final on Sunday morning Portland defeated Casterton for a second time, 53-24, and secured a spot in the grand final.

The Coasters then faced off against Horsham Hornets in the grand final at 3pm on Sunday at the Portland Basketball Stadium and took home a 45-28 victory.

Sarah Tunstall top scored for the Coasters with 18 points, while Jemma Nelson and Millie Jennings were both valuable with seven points apiece.

In the under-16 girls competition the Coasters were the team to beat after cruising through the regular rounds of play undefeated.

Portland breezed to victory against Millicent, Hamilton Hurricanes, Terang Tornadoes and Casterton across Friday and Saturday to lock up a semi-final clash with Terang on Sunday morning.

The Coasters then squared off against Hamilton Hurricanes in the grand final at 2pm on Sunday at the Portland Basketball Stadium and once again, couldn’t be matched, completing their clean sweep of the tournament with a 38-23 win.

Maddison Kanoa (12 points) and Tighra Cleary (11 points) got the job done offensively for Portland in the team’s grand final win.

Portland’s division two under-14 girls side hit a streak of great form at exactly the right time in the Portland Junior South West Classic, taking out a grand final win.

Portland was placed in the second pool alongside Warrnambool Mermaids, Millicent and Hamilton Hurricanes and experienced a rocky start to the tournament.

After a 51-15 loss to Warrnambool Mermaids on Friday, Portland rebounded with a four-point win against Hamilton Hurricanes on Saturday morning, before accepting a 15-point defeat from Millicent on Saturday evening.

When play resumed with a semi-final clash on Sunday morning, Portland crushed Koroit 45-6 to book a spot in the division two grand final against Warrnambool Mermaids Blue.

Battling it out in warm conditions at the Portland Basketball Stadium at 2pm, the Coasters defeated Warrnambool 33-28.

Sienna Stone was the star of the show for Portland with 14 points, while Maggie Barbary and Laylarni Taylor-Lovett both played excellent cameo roles.

Portland’s under-12 girls team enjoyed a weekend well worth remembering at Portland’s Junior South West Classic, completing a clean sweep of the competition.

The Coasters’ tournament began on Saturday morning with a 25-22 victory over Warrnambool Mermaids.

The good times kept on rolling from there, recording a chain of wins against Hamilton Hurricanes, Koroit, Mount Gambier Lakers and Warrnambool Mermaids White to lock in a spot in the grand final.

The grand final took place at Bayview College at 1pm on Sunday and Portland defeated Warrnambool Mermaids for a second time, 39-24.

Maddi-Lyse Stone was a sensation for the Coasters, scoring 23 points in the grand final, while Asha Stevens and Arlee Wilson were both valuable contributors.