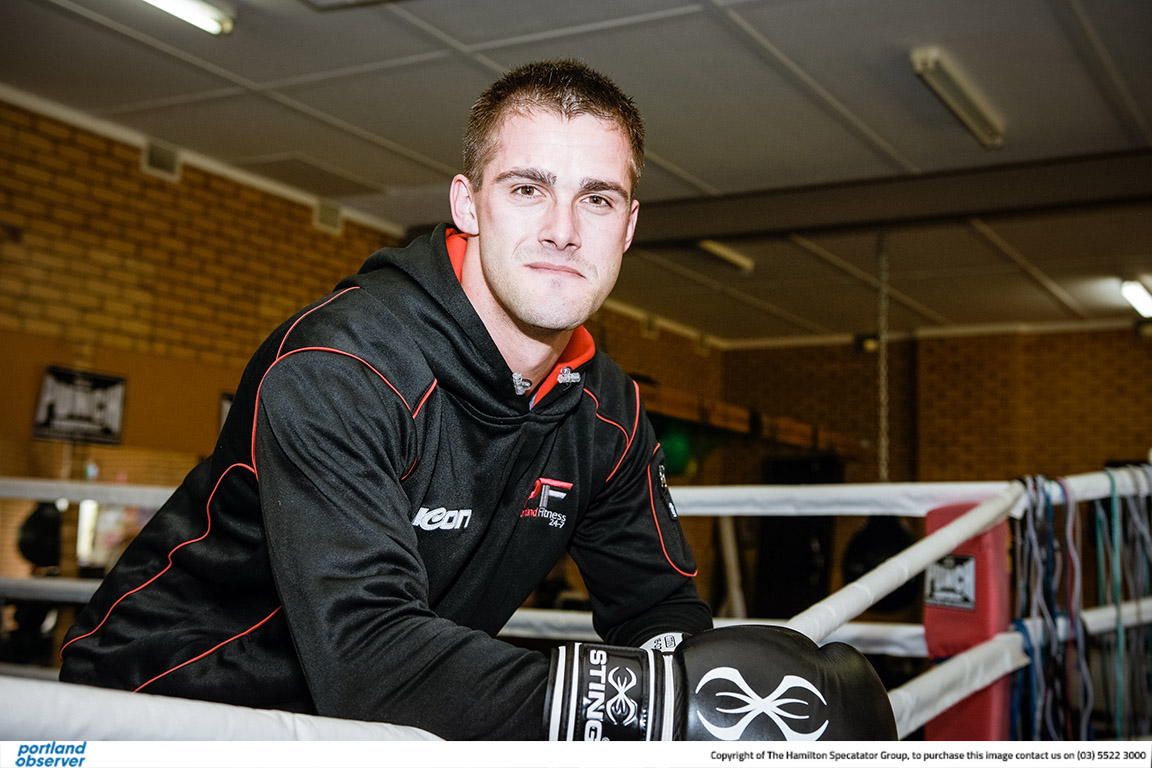 PORTLAND’S Mitch Riddell is off to Melbourne tomorrow to make his debut as an amatuer boxer. The 24-year-old will box as a part of the 2021 Lionel Rose Cup. Picture: KAREN HODGE 210322kh08
By Samuel Ord

PORTLAND Boxing Club members Mitch Riddell and Darryl Robinson are off to the 2021 Fight Factory Lionel Rose Cup tomorrow to make their debuts.

The Lionel Rose Cup happens annually at the Whitehorse Function Centre in Burwood in Melbourne, with a huge collection of Victoria’s amateur male and female boxers coming together to fight on one day.

Tomorrow’s event will be the 38th edition of the event, named after legendary Australian boxing champion Lionel Rose.

24-year-old Riddell, a southpaw, will fight tomorrow as a light heavy weight and is expected to weigh in at around 80 kilograms.

“I’m feeling very, very excited about what’s to come, it’s been four or five months of really difficult training all leading up to this weekend,” Riddell said.

“I’ve been training at the Portland Boxing Gym for two or three years now with Gary (King) and it all just started as a way to keep fit for the footy season.

“In early January, the idea of an amateur bout was proposed to me and in the blink of an eye, here we are ready to go.

“Like a lot of people, I probably packed on a few too many COVID kilograms last year, and boxing has been huge in that regard, I’ve lost nearly 10 kilograms in that three-or-so-month period getting ready for this fight.

“I don’t tend to be a nervous athlete or anything, footy never really makes me too nervous, but with this I’m not sure how I’ll feel just yet.

“Footy being a team sport, you’ve got those 21 other blokes to lean on when things get tough, but with boxing it’s just you out there.”

21-year-old Robinson is also a southpaw and will be fighting a middleweight.

In previous years Robinson had debut bouts partially arranged, only for them to fall through.

Riddell said his focus in the lead up to this fight had been tremendous.

“Darryl (Robinson) has been incredibly dedicated, he started at 89 kilograms back in January when he accepted the bout and right now he’s sitting on 74,” he said.

“It’s a lot of early morning sessions and eating right and sticking with the plan and he’s done a great job getting into fighting shape.

“Both of us are just incredibly grateful for all the work that Gary King has done.

“From all the regular sessions and preparation to extra planning and all of the advice you could ever possibly need.

“Gary’s knowledge of the sport is just incredible and he’s a really supportive trainer, none of this would be possible without his help.

“I’m also really appreciative of the work Joel (Norman) and the team at Portland Fitness 24-7 have done too.

“I was really worried about losing strength and losing muscle mass while training for the fight and trimming down as quickly as I did, but they got on board with us early on and helped us design a specific program that would keep me physically in shape for footy, as well as this fight.

“The trainers at the gym have helped out the whole way and been super supportive.”