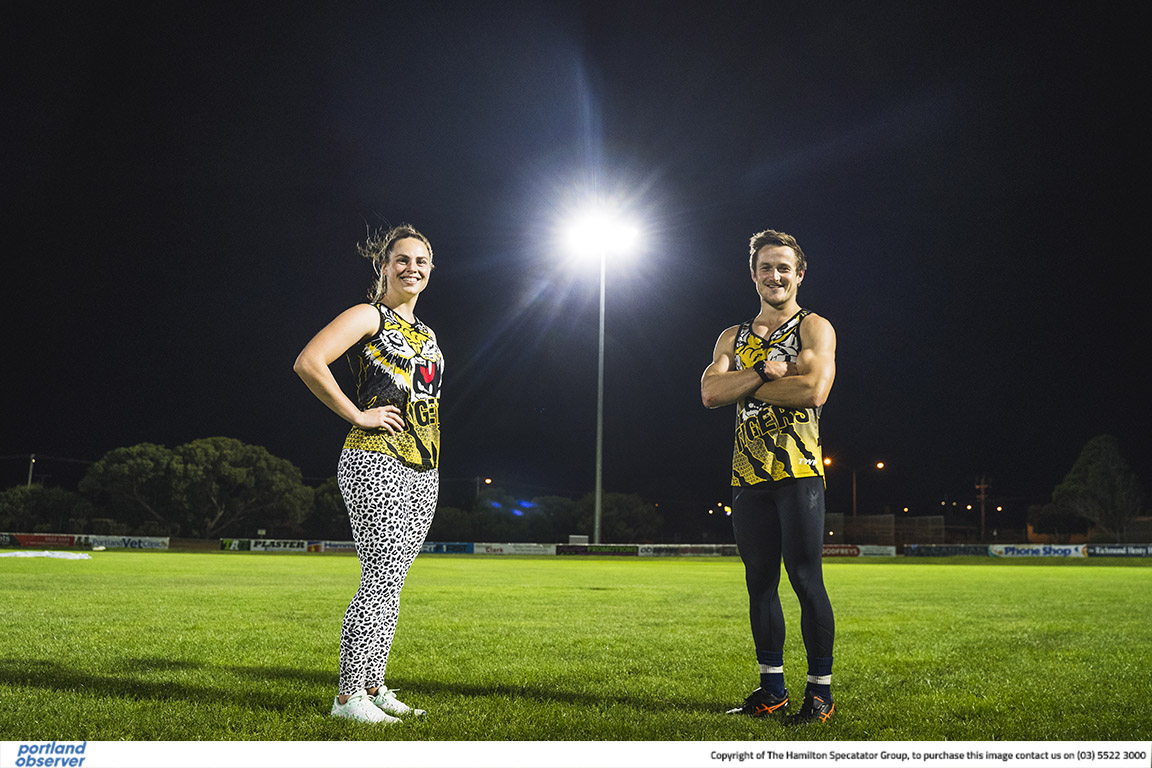 PORTLAND’S journey through the 2021 Hampden Football League season begins at 5pm tomorrow night with a round one clash against reigning premiers Koroit.

After the loss of the 2020 season due to the coronavirus pandemic, tomorrow’s contest is going to be an experienced defined by firsts for the Tigers – the first game in more than 500 days, the first game under Hanlon Park’s new lights, first-game players and the first game played under coach Jarrod Holt during his second stint as coach.

“Footy is finally here and the atmosphere around the team is really positive at the moment, everyone is keen to finally get started,” Holt said.

“This is definitely going to be an interesting season, in terms of form, I really don’t think any of the 10 teams really knows where they’re at the moment and the first few weeks will be all about working that out.

“I’m expecting form to be very up and down as the season goes on and teams get used to be being out there playing every weekend after so long off.

“The game can change enough as it is if a player misses a year due to injury, or travel or whatever, but for an entire competition to miss out on more than a year that’s something different entirely, I don’t think anyone truly knows what to expect.”

Portland’s first opposition is Koroit, the competition’s cream of the crop over the last decade, having won six premierships in a row between 2014 and 2019.

While tomorrow is round one for both teams, the Saints already have one match under their belt after playing a Good Friday match (officially round four but a clash with the Koroit Irish Festival) against South Warrnambool last week.

Koroit won that match by 48 points and Holt, who watched the game, said it was interesting to see both sides in action.

“I know the idea of facing a team as good as Koroit first up might seem like a negative thing for some people but as a coach, I’m really welcoming the opportunity,” Holt said.

“Sometimes in sport, when you come up against a really high-quality team or opponent, some of their traits can wash off onto you, and that’s what I’m hoping to see from our group this weekend.

“We’re going to be a young team looking for experience and I want our players heading out onto the ground with that in mind, that they’ve got a great chance to learn from a team packed with talented players and plenty of premiership success.”

In the lead up to the start of the season, Holt said the focus for the group was reinforcing the lessons learned during a busy preseason period and setting goals for the season ahead.

“We’ll be using this last week to return to the bigger ideas that I want the boys to have in mind for the season ahead, making sure they understand our structures and systems and our goals,” Holt said.

“The aim for us every week will be attacking the contest and being competitive from start until finish.

“These new rules – standing still on the mark and what not – they should really benefit us as a young team who can take the game on and score quickly if we’re aggressive enough.

“We’ll talk a little bit about Koroit and what to expect from them, but that sort of thing is more for the coaching team to worry about, for the players it’s important that they understand our brand of footy and how we’re approaching the game.”